Warning: The RoundUpDate will continue its annual fall prohibition against making jokes about any facts containing pumpkin spice. 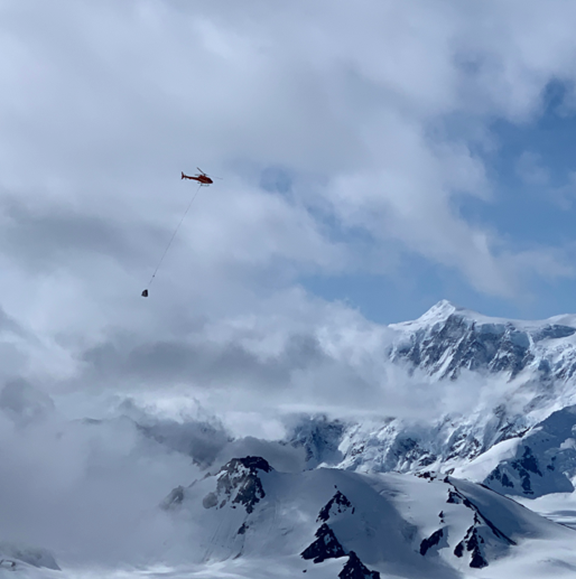 Changes next month to federal rules regulating how long pilots can work are likely to affect daily helicopter and fixed-wing availability for forestry crew and safety operations. Transport Canada’s amendments to the Canadian Aviation Regulations will tighten requirements for flight crew members’ hours of work and rest, including reducing flight time for pilots transporting passengers. The new regulations will take full effect across the country’s commercial aviation sector on December 12, 2022. The Transportation Safety Board of Canada has praised the changes having identified pilot fatigue as a factor or risk in at least 34 aviation incidents over the last 30 years. The amendments have attracted criticism from some helicopter operators as a one-size-fits-all approach, indifferent to the practical logistics of remote work, camp shifts, and the flexibility efficient helicopter work often requires. The rules are complex and their application will possibly vary depending on how aviation firms, particularly helicopter operators, reconfigure their businesses into compliance. The WFCA recommends forestry contractors get in touch with aviation companies they may use to clarify how their worker, seedling, and emergency transportation plans and practices might be affected in the future.

In Many Parts It Was The Warmest and Driest: But Was It Fall? 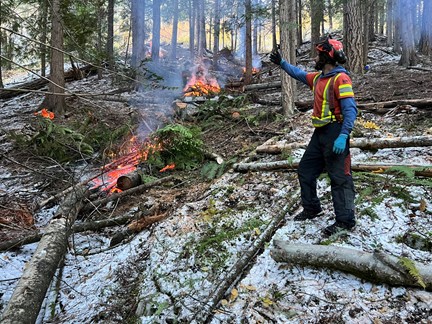 One of the few: A West Kootenay wildland-urban interface fuels management crew that didn’t get snowed out recently as November announced itself with a field season-ending winter storm in many parts.

In communities across BC this year October was one of the warmest and/or driest on record. Vernon, Chetwynd, Kelowna, Williams Lake, and Vancouver averaged between 1.7ºC to 4ºC above normal. Williams Lake (also), Penticton and Prince George had their driest October with Campbell River and Quesnel posting their third driest. This all ended with an atmospheric river and a polar high mixing it up in early November bringing the fall forestry field season to a sudden and unseasonable end in many parts. Fuels management work, pile burning, and other forestry activities ended overnight in the south Interior as roads and project sites filled in with snow. Many operators were counting on fall conditions to persist longer as they typically have done. But throughout this year our weather has been less than reliable: a delayed spring, sudden summer heat, then drought, an extended wildfire season, then the early onset of the ‘22/’23 snowpack. Managers are telling us they are now seeing weather as a significant uncertainty in successfully managing forestry projects. The wiser among them are building in contingencies and planning for upsets. They also say they’re realizing the value of some give and take when it comes to executing contracts vulnerable to temperamental weather. “This will take more compromise and cooperation between all parties to an agreement. Sticking to the rules may not be the best way to work in these conditions,” as one of them put it to us recently.

(For a full set of opinions on the current state of the BC silviculture contracting world, blogger Jonathan Scooter Clark offers his take and meditations along with his public planting bid tracking) 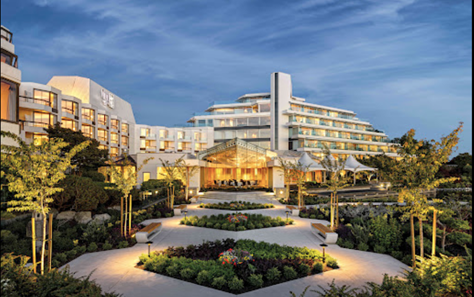 The WFCA 2023 Annual Conference, Trade Show and AGM will return to the Inn at Laurel Point, Victoria BC February 1,2,3 February 2023

Large and prolonged fire seasons are both the most likely and the most destructive climate risks we face in British Columbia. Riverine flooding is the second most destructive threat according to our BC Climate Action Secretariat’s 2019 Preliminary Strategic Climate Risk Assessment. This year our Minister of Environment and Climate Change George Heyman released the BC Climate Preparedness and Adaption Strategy Actions for 2022-2025.

That strategy extends funding to Clean BC to a total of $3.3 billion dedicated to reducing our greenhouse gas emissions. But when it comes to managing the landscape that provides some of the conditions for severe fires, flooding and their consequences the funding is far less: approximately $ 300 million looking at last year’s budget. Given that each severe fire season we have—three in the last six years—wipes out our gains in reducing emissions as far as our planet’s atmosphere is concerned, is this apparent funding gap a significant discrepancy?

At next year’s WFCA Conference our policy panel of experts will take stock of where forestry management is at and where it’s going in adapting to climate change, reducing the risk of disaster and helping our landscape ecosystems compose themselves. They’ll look at what land management decisions we will have to make. How we will implement them. And who will be relied on to do this important work.

Here are our panelists:

Garry Merkel, Co-author of our province’s old growth review and recommendations A New Future for Old Forests. Garry will discuss the “paradigm shift” he thinks we need to make in forest management. He will also discuss the implementation of the old growth report’s recommendation, “Declare the conservation and management of ecosystem health and biodiversity of British Columbia’s forests an overarching priority and enact legislation that legally establishes this for all sectors.”

Harry Nelson, UBC Forestry Professor and lead author of this year’s federal BC Regional Perspectives Report—Canada in a Changing Climate. Harry will summarize the report’s findings that BC has some distance to go in planning, funding, and commitment to meet the province’s climate change challenges. He will discuss how we can bridge that gap and the advantages and opportunities we have in reducing this threat.

BC Wildfire Service, is the agency at the front of our Ministry of Environment and Climate Change’s strategy to mitigate and prevent wildfire. The agency will discuss how they are interpreting and implementing that mandate. They will also outline the role they see forestry contractors playing in mitigating, preparing, responding, and recovering from severe wildfire events. (Speaker to be decided.)