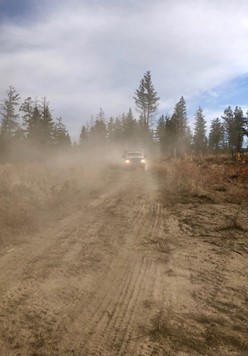 A fall tree planting crew navigates the dust for another dry day of planting this month on Vancouver Island. Workers and seedlings are finding it tough going.

We continue to talk about the weather. Since the weather warrants being talked about lately. Last spring’s prevailing cold and damp had forestry workers’ clothes taking on a life of their own; mildew mold. (Wash in vinegar we heard.) Three months of dry heat later, lack of water is the problem. With the jet stream drifting elsewhere, unfettered high pressure here has led to extreme heat, drought, and now an extended wildfire season. So far, rather than the replenishing rains of October, we still have haze and dust in many places. That is affecting our fall planting season. During the shortening days of this September and October, we will plant approximately 11 million hot lift seedlings, intended mostly for the backends of drainages unavailable last spring. Much of this happens on Vancouver Island, the coast, and the south interior. After a delayed start due to this unusual weather, we hear from some fall planters that the ground has hardened off–hydrophobic almost¬¬–without the usual softening caused by normal fall wet weather. On many sites in the south, organic layers are so desiccated no seedling could get a toehold unless planters can find deeper mineral soil. Some crews had to wait out the heat earlier this month when the temperature on their blocks reached 30ºC and 30% humidity—crossover figures fatal for seedlings. Fortunately, a little to the north things have been more normal. Yet it remains a close bet as to how all our fall planting will do if rain doesn’t happen soon. And what will happen if it all comes at once, which current forecasts are starting to predict?

How long before reforestation single-use plastics are banned? 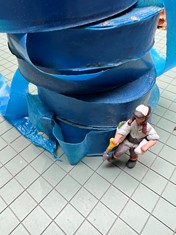 A towering waste of single-use plastics. One supplier estimates as many as 1.5 million rolls of flagging are used annually in BC to mark seedlings and forestry planning boundaries. A corn starch flagging fabric is now coming on the market in limited supply..

Late this fall our federal government will implement the first in a series of bans on single-use plastics (SUPs). As announced last June plastic checkout bags, cutlery, straws, food service ware, and stir sticks will no longer be manufactured, imported, sold, or eventually exported in Canada effective 20 December 2022. For the time being Industrial, commercial, and institutional SUPs, including the waste generated by reforestation seedling production and planting are not included in the ban’s first rollout. However, some municipalities across the province are beginning to push back against accepting commercial waste. The province’s own recycling program is advancing, but for now, it is focusing on consumer packaging. Nevertheless, the Forest Nursery Association of BC (FNABC) and the WFCA are now talking with Cleanfarms, a non-profit environmental stewardship organization to explore the practicality of recycling the films and forms used to grow and package seedlings. Meanwhile, the BC plastic policy working group a consortium of the forest, ranching, and government stakeholders is concluding that efforts to reduce planting flagging waste are, well, flagging. Now legislation is being discussed to ban plastic flagging in tree planting. One mitigating development may be the arrival in the market of corn-starch flagging that appears elastic and light and has passed some field trials with contractors. Compared to plastic it is three times the price. But considering how much plastic is simply wasted because it is cheap, more frugal use of the substitute might close the price gap. The WFCA has not been able yet to confirm the claims made by the offshore manufacturer as to the compounds used. A limited supply of the product is available from burk.urmetzer@motioncanada.com 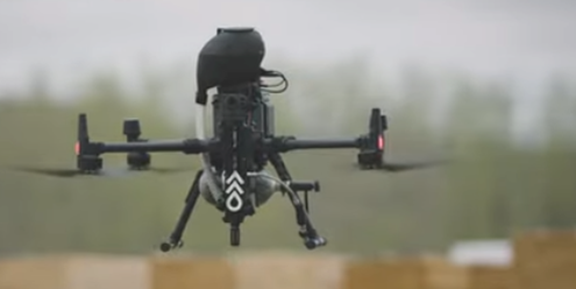 The final frontier of forestry may involve incessant buzzing

Drone planting promoters are understandably impressed with the technology of their drones, in part, because the technology is impressive. So, we can forgive their tendency to oversell their drones a little. The resistance to their enthusiasms, besides the status quo, has always been, “Yes, but can they actually plant seeds that will grow into a thriving plantation.” Well, it looks like we may find out something about what they can do following the announcement this week by our federal government of a $1.3 million contribution to Flash Forest, a Canadian drone technology reforestation firm. Their goal is to plant a total of one million trees over the next two years. The funding comes from the 2 Billion Tree Program and will include sites across Canada.