Warning: Contrary to widespread rumour, it is not a fact that Elon Musk has purchased the RoundUpDate, being this publication is priceless.

BC Interior and Alberta planting and forestry field seasons ramp up amid COVID, hyper-inflation, possible flooding, some frozen ground, more global warming, and all the usual stuff 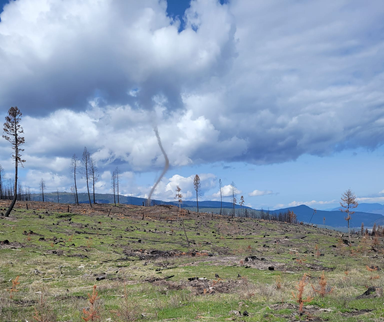 We hope this isn’t a portent: a dog-legged dust devil dances in the distance over a failed plantation near Monte Lake, B.C. at the beginning of the 2022 planting season.

• This being the third pandemic forestry field season, managing COVID infections remains a primary focus, particularly since many of the mandatory requirements to control the virus have been relaxed. Anecdotal reports show some crews have had clusters, but have been, or are being, managed appropriately; although not without costs to workers and employers. Employee screening has been intercepting some infectious individuals according to reports. The BC SAFE Forestry Program Safety Advocate Jordan Tesluk conducted ongoing employer workshops since early this year to keep pace with virus and changing rules.

• BCTS has indicated that it is not considering for now any adjustments to prices on contracts bid last fall as a result of the unexpected inflation and its effects on agreement-holders’ costs.

• As the BC west coast season wraps up and winds down interior crews are now mobilizing to plant the bulk of the estimated ~280-million seedlings sown for this year. Conditions range from some frozen ground still in the north to persisting drought conditions in parts of the south. About 5000 planters and their tree planting trucks are expected to be all at work soon.

The OH&S regulations and guidelines regarding First Aid Assessments and First Aid facilities include requirements, on where and when dressing stations should be available to treat serious injuries and shelter injured workers. Recent WorkSafeBC inspections of silviculture workplaces have found deficiencies in the deployment of these First Aid resources. These findings apply particularly to the need in many cases to have dressing stations located closer to, or on, individual planting blocks where crews are working. WorkSafeBC in its regular field inspections of operations this year will be looking for close adherence to these rules. BC SAFE Forestry Advocate Jordan Tesluk is preparing a bulletin to assist employers in making any necessary changes which will be reviewed and released next week. For general information on First Aid assessments and OH&S regulations we recommend these sites: 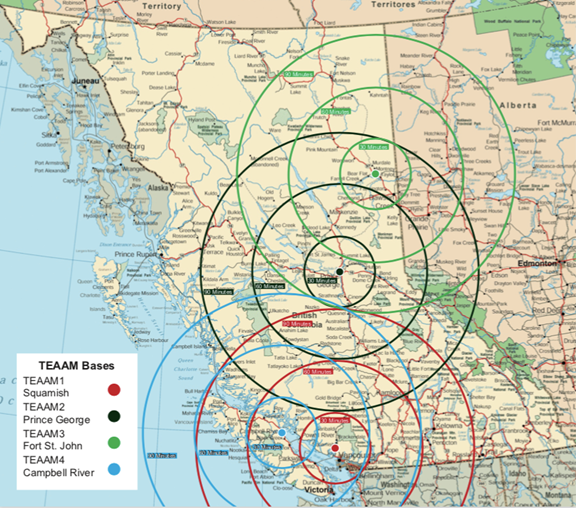 Technical Emergency Advanced Aeromedical (TEAAM) is on a membership drive to add 2000 new subscribers by June. Besides offering response coverage to almost 70% of the province, according to TEAAM President Miles Randell, the helicopter emergency medical service will soon offer mission insurance starting in June. The annual rate at $40 per person includes up to $30,000 in mission costs. Other benefits include dental and ambulance insurance with subscribers eligible for the coverage for the full year. For more information contact Maria Delaney at mdelaney@capricmw.ca.

Once again, Can we find better ways to deal with empty tree boxes waste? 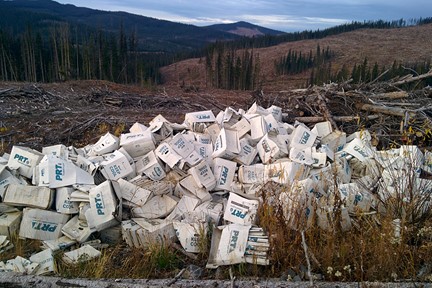 Waste tree boxes waiting to be burned. Lately permits and places to burn boxes are harder to come by. Not all regional district waste streams can deal with them either. The WFCA is looking for some brighter ideas.

Lately we have been hearing from some regional districts about some solutions and some continuing problems with the volume of discarded tree boxes in their waste streams. Cariboo Regional District (CRD) is most happily placed to deal with this stuff having worked out an agreement with the Atlantic Power Williams Lake Project. This 66 MW biomass-fired generated facility is located in Williams Lake and has been accepting shredded boxes from the regional district. The CRD, which spans the cities and districts of Quesnel, Williams Lake, 100 Mile House and Wells in the central interior, charges tipping fees and then shreds and transports the materials to the plant. The feasibility of repeating this arrangement in other regional districts with cogeneration plants operating within their boundaries is something we are looking into. Meanwhile, the Regional District of Fraser Fort George would like to avoid dealing with the nuisance of boxes just being left at their unmanned depots north of Prince George. Contractors in other regional districts report that places and permits to burn boxes are becoming harder to come by.

Operators in the Cariboo Regional District can find out more about how to dispose of their boxes by contacting their environmental services department.

And now a word about fire and floods here and there:

Siberia is already seeing massive wildfires—some of them burning around still frozen lakes— in an unusually early start to Russia’s wildfire season according to the Siberian Times. The Washington Post reported that the Siberian smoke already tinting skies in western parts of this continent will worsen because Russian wildfire fighting resources are tied up in the assault on Ukraine. South of here the U.S. west wildfire season is more or less endless with major wildfires in Colorado and California this winter. In New Mexico 16 of the state’s 33 counties had wildfires burning near the end of April. The Tunnel Fire near Flagstaff, Arizona burned 20,000 acres with the help of high winds and high temperatures. It is now 95% contained. In British Columbia the BC Wildfire Service has released its Wildfire Seasonal Outlook indicating a moderate probability of a cooler than normal summer. Wildfire severity will likely trend below average over much of the province, although BCWS advises the historical reliability of these long-range outlooks is not exactly high. Adding to that uncertainty might be the persistence of La Niña for a third year. There is not a strong correlation between this cooler oceanic and atmospheric climate pattern and wildfire, although last year’s La Niña conditions brought a heat dome, a wildfire emergency, and atmospheric rivers to deal with in B.C. Speaking of floods, the BC River Forecast Centre says increased mid and high elevation mountain snow pack and delayed melt has the flood risk trending moderate for most of BC and high for the Fraser River. 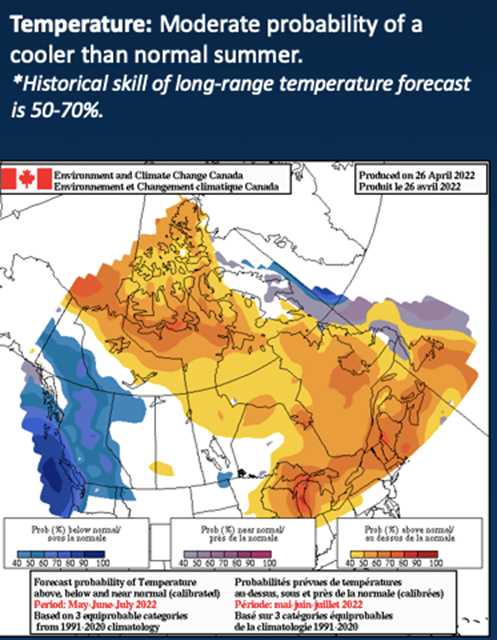