Warning: Many of the facts contained in this edition are prone to interpretation and may be subject to the reader’s own biases.

Tree Planting and Seedling Nursery Base Premium Rates Set to Rise in 2019: Fire Fighting, Brushing and Field Services Will Drop

By the end of this month WorkSafeBC’s board of directors will approve 2019 base premium rates for businesses based on preliminary figures posted last summer. Tree planting employers will see their classification unit insurance rates as a percentage of assessable earnings rise five percent from this year’s $3.61 to $3.78 next year. Seedling nurseries’ rates will move from $1.85 to $2.06. Benefiting from lower rates in 2019 are: wild fire fighters, $7.81 to $6.19; field work services, $2.19 to $1.77; and brushing and weeding $8.10 to $6.53.

These actuarial numbers are useful for anticipating business costs next year. They are less helpful as indicators of actual safety performance. Classification units’ rates can be affected by the performance of other industries pooled in the same rate group. The ebb and flow of the world economy can also affect rates as it drives returns on WorkSafeBC’s investments which get reflected in premiums as well. Of course, performance does get caught up in the actuarial wash, but it may not be the main determinant of a CU’s base rate. An individual firm’s experience rating also effects the bottom line of what employers actually pay for work place insurance.

We wouldn’t be the Rumour Mill RoundUpDate if we didn’t occasionally traffic in rumours and unsubstantiated surmise now and then. This is one of those occasions. Although we don’t subscribe to or audit the figures posted on Jonathan “Scooter” Clarke’s replant.ca where he has tracked the public planting tender results for years, we thought we would mention them. Wisely Mr. Clarke has covered himself in caveats—like this might be too soon to interpret the results—with the release recently of some analyses of early openings. Nevertheless, we may be seeing the makings of a trend. These are low bid auction trees in the government market. Licensee prices tend not to fluctuate as much with changes to supply and demand.

Fuel management projects intended to protect communities from wildfire need new rules on revenues charged on fibre and the future management of the areas treated according to the WFCA in a recent submission to our provincial government. Costs for these kinds of treatment can be very high. Nevertheless, the reason these high costs are tolerated and paid for by tax payers is because the benefits of protecting communities are deemed worth it. It seems counter-productive then that our government should use the commercial stumpage system to tax any marketable fibre removed and sold from these projects. The result of collecting that revenue by one hand just drives up the cost the other hand has to pay for the project. And no one is pocketing the money from selling the fibre other than to apply it to the project’s costs. The remedy we say is to not charge stumpage on any sellable fibre in the first place so we can treat more area through reduced costs. Another area needing attention is addressing the risks of these treated areas being commercially logged later. This has happened. A treated stand often contains limbed trees and is absent brush and non-commercial waste making it mistakeable for an efficient logging opportunity. Obviously, that is counter-productive and ways need to be taken to prevent it from happening.

Bruce Blackwell Principal of B. A. Blackwell and Associates and Western Forestry Contractors’ Association director has accepted the invitation of his fellow directors to act as interim president of the WFCA after the recent retirement of former President John Lawrence. Blackwell will then stand for formal election at the association’s AGM early next year. Mr. Blackwell brings to the WFCA presidency three decades of experience as a professional forester and two as professional biologist along with his master’s degree in forestry. He has also been acknowledged by his peers as a forester and recently for his meritorious service as an alumnus of the University of British Columbia. Mr. Blackwell will be leading the WFCA after its recent amalgamation with the Consulting Foresters of British Columbia at a time when public expectations around reforestation and ecosystem restoration are rising because of climate change and the perceived depletion of our forests due to pest and wildfire. His expertise, professional and policy networks and his long association with the WFCA and other associations will prove an asset in these interesting times.

And Now a Word From One of Our Fellow Associations: 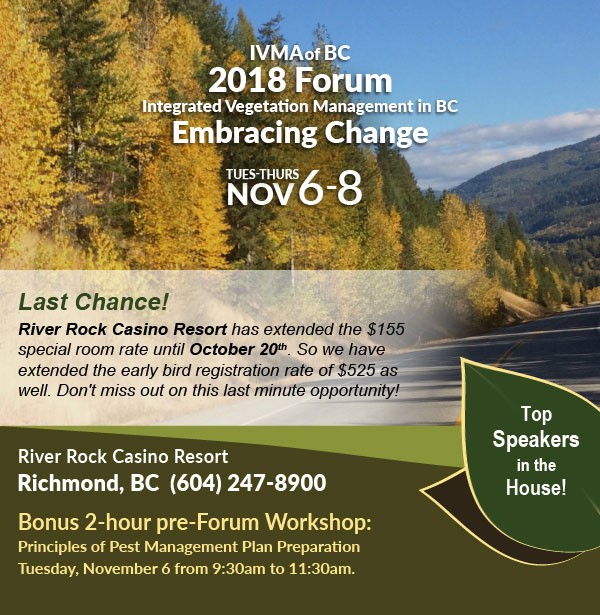