Warning: Some of the facts mentions in this issue may be on summer holidays.

Manual Brush Saw Equipment Operaotrs Have to Play by the Manual

At the risk of giving away the ending to our pending brushing and clearing equipment guidelines it all boils down to this: All equipment must be operated within the manufacturer’s guidelines, which can be found in the owner’s manual. It’s that simple. But in many cases it’s not followed. One of the most common and non-compliant configurations is to equip lighter brushing tools, usually ones with a D-handle, with heavier duty clearing saw blades. This arrangement, commonly found in the field with the blade guard removed as well, violates two manufacturer’s specifications and OH&S regulation. It makes for a particularly dangerous piece of equipment. With the highest injury rate among silviculture activities the brushing and clearing sector needs to change how it trains and equips workers. Forest company and ministry clients can help with this culture shift by requiring that contractors demonstrate that their crews are operating saws within manufacturers’ specifications. If they can’t show their on-site equipments’ configurations in the manual, then the tools are out of compliance. 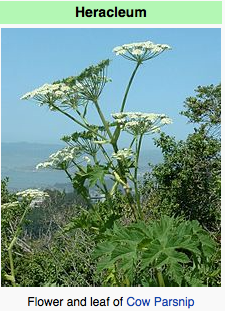 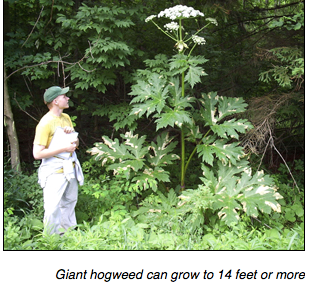 The notoriously invasive and dangerously noxious giant hogweed (Heracleum mantegazzianum), which can cause blindness, has yet to be reported on silviculture projects in western Canada. But the similar cow parsnip (Heracleum lanatum) is a common plant brushing and planting crews are likely to run into this time of year. Cow parsnip can grow to five feet in height. The stems and leaves contain furocoumarins; chemicals which are photosensitive, causing burn-like blisters on the skin when exposed to light. Brushers using mechanical weed-eater style string tools basically atomize the sap leading to phytophotodermatitis on exposed skin. The sap can remain on the skin, sometimes for days, without forming blisters until light hits it. This can baffle first aiders and victims. When the blisters clear—depending on the severity of the burns—they can leave disfiguring scars. Supervisors need to be able to recognize these remarkable, but hazardous plants on projects, and advise workers to avoid contacting or handling them.

Forest ecologists fear the Fort McMurray fire may have burned with enough severity to ignite the parts of the boreal peat beneath it according to a report published in Ensia magazine. If dry enough, peat can burn deep underground, often for years proving resistant to suppression, other than torrential rains. Burning peat can create some of the largest fires on earth, the worst examples, so far, occuring in places like Indonesia. These insidious fires account for 15% of anthropogenic green house gas emissions per year. This is not a promising prospect for much of our north where researchers say global warming will continue to dry Alaska’s and Canada’s western boreal forests.

According to a recent paper published in the June 17 edition of Science Canada’s north-east may become a boreal forest climatic refugium because of increasing precipitation in those parts and increasing evaporation to the west. This leaves most of the Canadian boreal forest continuing to dry, risking increasingly severe wild fires capable of setting off massive, smoking peat fires; possibly burning year-round. Meanwhile The Tyee reprinted a 2015 article from Yale Environment 360 saying that the world’s boreal forests, which make up one third of the forested area on the planet, are showing multiple signs of steep decline; massive wild fires being one of them. The Tyee also noted how little media coverage of the Fort McMurray fire drew any connections to global warming.

These Fires are Huge, Hidden and Harmful. What Can We Do?