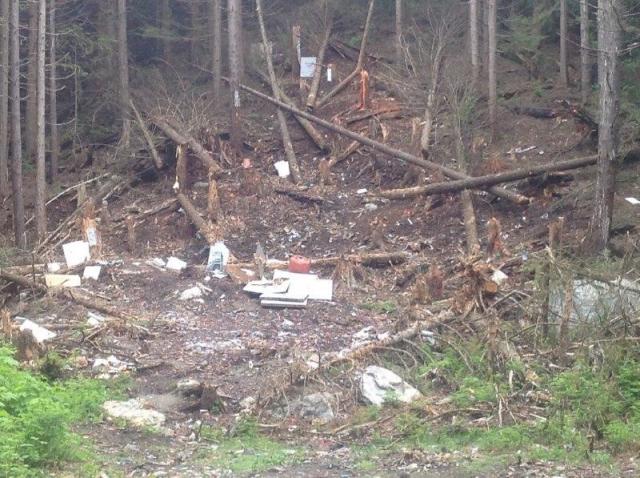 Standing timber felled by gunfire—a problem with high concentrations of lead in the air.

We know. We ran the story of reckless target shooting last edition. And here is another picture. But there is more to the story. We didn’t write about the belligerence, the booze and the crowds roaring around in pick-ups and recreational vehicles tearing the place up along with the shooting. Fortunately that story was run this week by the Vancouver Province (click here) newspaper focusing on the general lawlessness of these parts of the Fraser Valley and official attempts to rein it in. 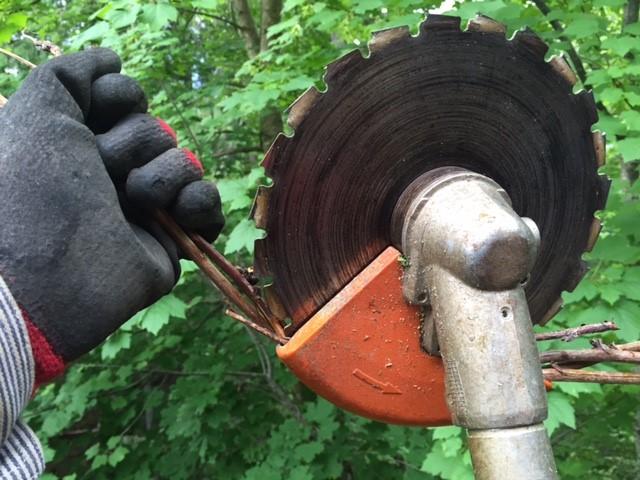 Removing the guard is not the answer.

There weren’t a lot of surprises at last month’s productive meeting between brushing contractors, workers and clearing saw and brushing tool manufacturers. No, removing guards or limit stops does not make the tools safer according to the manufacturers. Nor can you do things like attach a clearing saw blade onto a lighter brushing tool even if the blade fits. Yes, the manufacturers will consider ideas about changing the design of some of their tools. But the chances of head office taking up those recommendations are slim. And besides engineers have already modified the tools to take into account problems with brush jamming blades reported already by operators. So contractors may have to have different tools available for the varying terrain and brush size and density. They will have to use different guard attachments, blades and filing techniques to get optimal results from their equipment. There is no single tool or technique that can work effectively on all types of slope and brush. And modifying a tool to gain efficiency makes things worse from a safety perspective. The main outcome from this meeting will be a report recommending which tools and configurations of guards and blades are recommended as safe and productive for the varying conditions in which brushing and clearing takes place.  We expect this will take a few weeks at least.

We are pleased, of course, to hear that Greg Anderson will have a pivotal role in the Forest Enhancement Society of B.C. as its first executive director. A fellow traveller of the WSCA on forestry and ecosystem restoration during his years with the Ministry of Forests, we are looking forward to him taking up his new position this July. He has been engaged in special assignments with the ministry since the 90s, most recently implementing the Ecosystem Restoration program of B.C. His first task now will be to set up the FESBC’s offices in Kamloops and then begin transmuting the various promises of forest enhancement into actual work on the ground. What could be more simple? 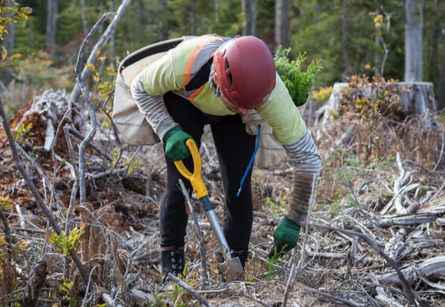 Our goal is to see that injured workers are assessed and treated as quickly as possible so they can get back to their season.

Claims management for firms operating temporarily and in remote locations with limited medical service can be a challenge for injured employees and employers. If you are wondering if physiotherapy is an avenue you can take to help workers get back to work sooner and reduce claims costs, you will be interested in the attached document. In 2015 alone, tree planting claims accounted for over 1.1 million dollars in costs and over 2600 lost days of work. Most of these arise from slips and falls and overexertion, with 56% the claims resulting in strain/sprains type injuries. Often, these types of injuries respond well to physiotherapy. Read more here.