We probably don’t give government credit enough. But before we do, let’s start with two news stories from last week. The Vancouver Sun’s March 3 front page headlined Boeing looking at forest waste to fuel its jets. This is actually an old news story. We heard it more than a year ago at our WSCA 2015 conference from BC Bioenergy Network’s Michael Weedon. It shows that forest biomass is so renewable you can recycle it as news. Anyway, in the same edition columnist Vaughn Palmer opined about how the latest government sale of oil and gas drilling rights netted zero dollars and how this might be seen as falling short of LNG expectations in some quarters. We ask, Are these two concurrent stories just a coincidence? Or are they part of a larger emerging pattern signaling a deeper shift away from the fossil-fuel economy and significant opportunities for forestry? Hold that thought for the conclusion of this.

Now look at the above graph showing how our provincial forests have gone from carbon sink to net emitter status over the last decade: obviously not helping with Canada’s green house gas (GHG) and economic development goals. And emitting GHGs is not the only problem facing our forests. There are timber shortages, habitat loss and a growing threat from wildfire to name a few. Restoring our forests to conditions that mitigate these trends is a pressing imperative. That is why we see establishing the Forest Enhancement Society of BC and its restoration mandate as such a necessary and welcome thing.

But getting back to the good idea part. Government hasn’t been too specific at this point other than framing for the Society a general restoration goal, naming an initial board of directors and funding of $85-million. Nevertheless, the Society will be at arms length from government, it’s mandate should not offend the Softwood Lumber Agreement, it can operate separate from government’s and industry’s restoration objectives and obligations, and it has the possibility of outliving governments and electoral cycles. This independence is its potential advantage. It will be largely unfettered to focus on the primary goal of restoration—which we understand will include viewing things through a wildfire lens—allowing it to leverage ideas, influence and funding from, not only the province, but the municipal and federal governments and even creative groups who normally only occupy the margins of influence on forestry (read WSCA). Which brings us back to the beginning of this screed. We cited a potential shift in the fossil-fuel economy, mentioned one example of promising innovation around forest biomass (there are many more*), and pointed out how our forests are not meeting national GHG objectives and provincial forest restoration opportunities. If there is a group now able to connect these dots, and many other creative strategies, it may very well be the Forest Enhancement Society of B.C. Good idea. Good thinking.

Are Aliens Doodling In B.C.’s Woods? Or Is It A Sign Of Intelligent Forestry Life? 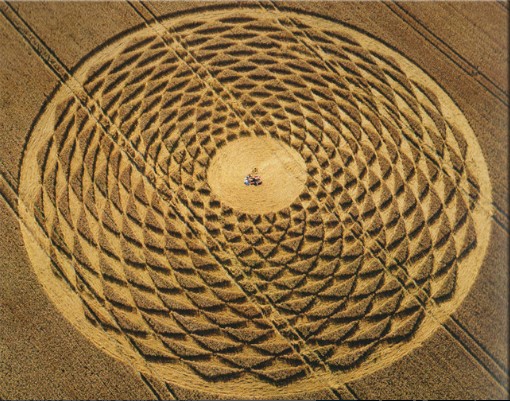 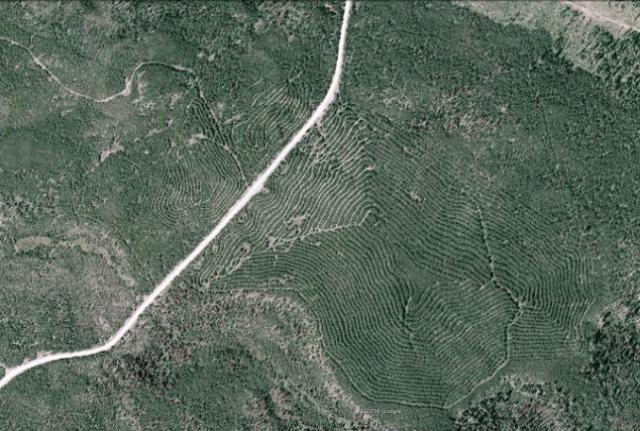 We are great fans of crop circles here at the RoundUpDate. Crop circles have been turning up for decades in farmers’ fields, primarily in England, but around the world as well. So we perked up when we were sent a Google Earth image of similarly tantalizing patterns taken from orbit of some forests in southern British Columbia. Turns out it is actually nothing too exotic as the following on-the-ground photo shows. No UFOs. It is mechanized repression spacing being used to control some post wildfire regeneration. Time will tell whether it is intelligent forestry. 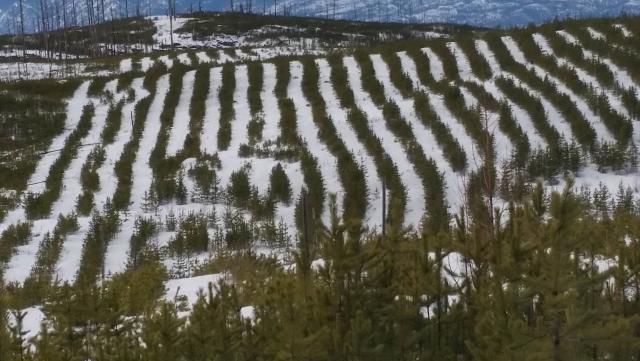 The province announced today the appointment of a spruce beetle manager to address one of the largest and most rapidly expanding spruce infestations since the 80s occurring in the Omineca region in the Prince George TSA. Heather Wiebe, resource manager in the Mackenzie Natural Resource District may have her work cut out for her dealing with the 156,000 hectares of affected forest. Of course we all remember the last time government appointed a beetle boss. That was for the mountain pine beetle.