As the days shorten we go to greater lengths to tell you logging truck roll-overs are down, BCTS surprises everyone with standing bid deposits, the Premier puts more $ into fuels management, we’re luke warm on frozen plugs, and what can the Amazon jungles tell us about building forest soils?

Warning: Some of the opinions expressed in this issue may contain facts.

This is a good news story. And the money will do good work and we are glad of it. Given the consequences of interface fires (2011 Slave Lake Fire has cost $700 million so far, Kelowna 2003 firestorm $1-billion plus to the BC economy) the B.C. government’s recently announced $10 million commitment to the Strategic Wildfire Prevention Initiative might save us many times the investment. But overall the basic math is not all that great. In fact it’s discouraging. With the current costs of treatment running around $10,000 per hectare, according to the Forest Practices Board May 2015 report on WUI fuels management, the new money just bought us 1000 treated hectares (10 square kilometres). And how many hectares did we last say were out there needing treatment? FPB says 685 sq/kms of “high risk” forest adjacent to communities. And this figure comes from older 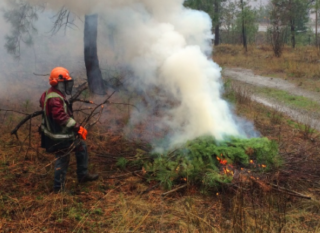 reports concentrating primarily on the fuel hazard. A more rigorous risk analysis considering the growing fuel hazard, community vulnerability and the likely consequences of a WUI fire might actually show a larger area needing work. Nevertheless, it is obvious there are limits to how often rural mayors can go back to government for this necessary funding. We need a grander, long-term plan than the current one if we intend to put an enduring dent in the province’s worsening wildfire threat.

Logging truck rollovers on B.C. highways have dropped significantly in the last three years. In 2013 there were 37 reported, including one that killed a motorcyclist. There were almost half that many in 2014 at 17. This year eight. There are 1.4 million log hauling trips made annually in the province. So these kinds of crashes are rare. But their consequences are severe, particularly when they involve the public. Part of the good news has to be the strong correlation between the BC Forest Safety Council’s Anatomy of a Rollover logging truck driver sessions and the drop in incidents. More than half of the industry’s 2800 drivers have attended these crash prevention seminars over the last two years. This would seem to say that this kind of education can go a long way towards driving down truck crashes. As taught at the rollover workshops vehicle design, handling dynamics, loading and the laws of motion are all part of the BC SAFE Silviculture Program’s excellent Resource Road Light Truck Driver Training curriculum. Unfortunately pickup drivers are not going to the same lengths as log haulers to educate themselves. Although available through the Council fewer than 50 drivers have received training to this industry standard so far this year.

Luke warm on frozen stock[/caption]Luke warm on frozen stock[/caption]Luke warm on frozen stock[/caption]A quick poll around the room at last month’s WSCA Annual Business Summit found few rave reviews for handling and planting individually frozen stock. Only a few million of these seedlings were produced this year based on the promise of perhaps better planting quality and production, fewer stock handling concerns and more flexible scheduling. But in practice nursery workers saw greater risks of repetitive strain injuries due to the individual seedling wrapping required. Planters were frustrated with the frozen stock often remaining inseparable, especially if the stock was waterlogged prior to lifting. (In some cases landings were littered with broken shards of plugs as planters found creative ways to separate solidly iced seedlings.) Helicopter lifts were heavier and managing reefers with a mix of thawed and frozen stock was problematic. As well, the seedlings were not easier to plant than thawed stock. Industry has been criticized lately for not being innovative. Nevertheless, this innovation may still need work.

Here’s a cool idea: restore our forests by taking ancient indigenous Amazonian soil-building practices and combining them with emerging bio-energy technologies that utilize forest waste wood and mill residuals. Sounds like a virtuous cycle. Terra-preta the unusually deep and exceptionally fertile dark soils found in parts of the South American jungles were cultivated by pre-Columbian agrarians by combining compost and charcoal. It may be possible to similarly enhance forest productivity here on a large scale with commercially-developed soil-building charcoal products. Read more:  https://wfca.ca/2015/09/can-ancient-indigenous-columbian-technology-aid-forest-soils/

For years contractors have asked BCTS for more consistency around the collection and application of bid deposits for silviculture projects. Just the same, last week’s roll out of BCTS’s continuous (standing) bid deposit plan came as a surprise to most everyone. It’s the right idea in principle. But how it works in practice is still unclear on a number of points. In order to address those concerns BCTS has posted a Q and A on BC Bid under the September 25th notice to vendors NTV-BCTS001.