Warning: Our fact checkers are on holidays. The contents of this issue may contain unchecked facts.

BC Timber Sales will present an overview of their proposed contractor pre-qualification rating system to be used in awarding future silviculture contracts as a key topic at the upcoming WSCA 2015 Annual Silviculture Business Summit set for Richmond, B.C. Wednesday 2 September. BCTS plans to take the framework to an industry working group for more detailed input later this fall. If all goes as planned a pilot implementation will begin before the year is out. The proposed change follows on last year’s BCTS Effectiveness Review, which recommended that the government find practical alternatives to awarding contracts solely on a low bid auction basis. The WSCA contributed to the Cabinet review, in particular advocating that BCTS use contractor performance as a factor in prequalifying bidders and awarding competitive bids. The Summit is open to all contractors operating in British Columbia. To register contact the WSCA at admin@wfca.ca or phone 604-736-8660.

Wildfire dominates news in BC and much of North America

Wildfire returned to the BC landscape and media attention in the last weeks with a series of dramatic and fast moving interface fires in the South Interior. Meanwhile the U.S. moved to their highest National Preparedness Level 5 with the National Interagency Fire Centre stating all civilian resources (approximately 30,000 wild fire fighters) are fully committed fighting fire in ten states. The Montana governor has even been approached to ask businesses to free up staff to volunteer for fire fighting duty. Back in B.C. the Vancouver Sun posted videos of local residents protecting their homes fighting the flanks and doing mop up on the destructive Rock Creek Fire. The province’s fire fighting costs have passed $200 million this year, once again exceeding the ministry’s budget. When reporters asked why the government hasn’t allocated more, given the obviously increasing costs of suppression, MFLNRO Minister Thomson gave the somewhat baffling reply that if government annually budgeted more for wildfire it would mean taking money from other programs. Which, of course, is exactly what must be happening.

WSCA asks Branch to review use of contract suppression crews.

As the trend towards increasingly destructive wildfire continues, wildfire fighting resources will be in short supply, if they aren’t already. Fears for next year are already growing given the forecasted larger climatic patterns. And 2015 is not over. The WSCA recently met with the BC Wildfire Service to discuss ways to make the most effective use of contract wildfire suppression service providers and the province’s standing offer. Contract fire fighters are used to fight fire in B.C. on an as-needed basis to reinforce government resources. Wildfire Service sees them as vital part of the province’s suppression capacity providing equipment and up to as many as 1500-2000 competent hand crews. But the current model for procuring contractor services is not meeting many contractors’ expectations as they struggle to find enough work on the fire line to recruit and retain competent workers and get a fair return on their investment. Wildfire Services has agreed to talk once the smoke clears.

Pepper spray found to be most effective in deterring bear attacks.

Fortunately we have not heard of any serious forestry worker wildlife attacks this year. Meanwhile Bear Smart reports that pepper spray is more effective than firearms in repelling attacking grizzly or black bear. They base their conclusions on work done by the U.S. Fish and Wildlife Service reporting that experienced hunters using firearms to defend themselves suffer injury half the time. People using bear spray come away uninjured most of the time. These conclusions are supported by the work of Canadian bear attack expert Dr. Stephen Herrero. Interestingly Herrero’s studies cite results from “controlled laboratory tests.” We are left wondering what a controlled laboratory test with a pepper-srayed grizzly might look like. Also, how does he convince people to volunteer for the tests? Nevertheless, these conclusions are another good reason to carry pepper spray working in the woods, as well as in those large gaps that used to be woods, where silviculture workers are often found.

Is it all just smoke and ash in the end?

Apparently not, according to the MFLNRO Forest Practices Branch. Referring to our recent bleak assessment of the burn severity on recent fires in the Cariboo and the widespread potential for desertification on the landscape MFLNRO’s Forest For Tomorrow (FFT) program may offer some encouragement. Apparently FFT seedlings planted on the white ash moonscapes left by the destructive 2009 Lava Canyon fire and other similar Cariboo burns are doing exceptionally well. According to the Branch the burned sites are recovering in short order compared to the decades they would have taken if left unplanted. The Branch cited very little observed natural regeneration on the sites.

Many readers may have recently felt something was missing. 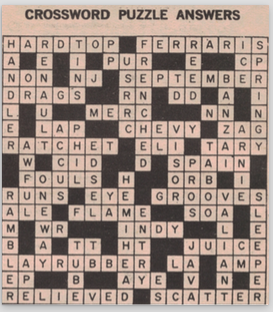 Of course we publish the RoundUpDate every other week. And last month we skipped a publication so our editorial staff could get relief from scriveners’ palsy and the general drudge and grind of producing this unique silviculture journal. As a compensatory gesture for the unease we may have caused by skipping an edition we are now offering the answers to the crossword puzzle that we would have otherwise included had we published the last missed issue. We hope this clears up any possible confusion. We appreciate your many cards and letters.