After a summer of sweltering RoundUpDates this edition finds our fact checkers getting philosophical, the Vancouver Province pronouncing the planting season a wash due to dry conditions (a kind of wash dry spin), the Forest Practices Board finding more fault again, and we saying OK, OK, enough with the planting robots.

Warning: Our fact checkers report that in checking facts they often have to check other facts, which requires checking the facts that support the facts they are checking leading to an infinite regression of fact-checking. They feel this raises certain ontological issues around the nature and reality of facts. Therefore some of the facts contained in this issue may not exist, at least from an epistemological perspective.

Understatement has never been a hallmark for the Vancouver Province’s headline writers. But more editorial restraint might have been in order rather than suggest that this year’s 250 million seedling planting “exercise” amounted to going through the motions to doom and drought. We did loose around 10 to 12 million to last fall’s early frost. And certainly there will be some fill plants in the future judging from some recent planting block walk-throughs here and there.  But the whole province didn’t bake and we shouldn’t underestimate seedling resilience and differences between regions and from site to site. We will know more in a year.

A better story is how well the industry adapted to the initial nursery losses, the season arriving weeks ahead of time, and the logistical challenges and planting difficulties crews had to deal with this spring associated with drought and heat. It seems in the end that workers managed to get their workdays in. Injury rates stayed low. We bridged the Coast to Interior transition in time without falling short on workers and production. And now the Coast fall season is going ahead. All in all, a success as a campaign. Can we keep this up if things stay on the same trend? Is April the new May in the Interior? According to 2015 sowing requests planting in 2016 is headed for the same total seedlings as this year; between 250 and 260-million. We will see what the persisting El nino, the Pacific Decadal Oscillation and the Blob have to say on how well we do next year.

Lately the province’s forestry watchdog has reported serious deficiencies in forestry roads, bridges and now planning. The Forest Practices Board, which normally speaks in technical understatement, delivered a sharp reprimand saying it was “truly disappointing” to report licensees, government and forest professionals are again falling short of expectations on meaningful public involvement, professional reliance and innovation in forest stewardship plans. Seeming to contradict these dire and fundamental failings, forestry practices are meeting the requirements of regulation, as MFLNRO Minister Steve Thomson pointed out in defense of government. But how is it possible for these two apparently contradictory states to exist at the same time? To answer that, we have to read between the lines, or just talk to the many disaffected foresters in the province. What this paradox suggests— and is perhaps what the Board is trying to get at—is that the regulatory framework itself is the problem. These failings the Board reports are deeper operational and policy shortcomings within the Forest and Range Practices Act announcing themselves. To properly encompass and protect the public good and corresponding values on the forest and range landscape we need a new model and new purpose. Events across the landscape would seem to support government meeting this imperative as we face climate change, the post MPB landscape, wildfire and midterm timber supply challenges.

Please: no more about robots and planting 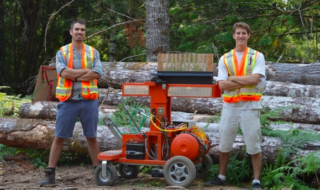 Planting trees may be repetitive and even monotonous, but it is hardly robotic. The working treeplanter’s brain is not just delivering a dial tone. It does take some cognitive bandwidth to plant trees, along with dexterity and strength. Nevertheless we have answered way too many calls from the media and the generally curious about an experimental tree planting robot developed by two obviously clever engineering students at University of Victoria. Here is our official statement. This is a great engineering project and congratulations to Nick Birch and Tyler Rhodes. But it is not about to replace tree planters, at least not on much of the typical terrain we reforest in the province and not any time soon. We think it is numerous design iterations and a few miles of duct tape away from a working machine. We wish everyone the best.