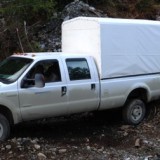 Warning: It has been said that the only statistics anyone should trust are the ones they have made up themselves. None of the figures presented in this issue were made up by us. Treat them accordingly.

After dusting off tree planting figures from as far back as the Devonian Period (mostly ferns and horsetails), we’re concluding, until otherwise corrected, that this year will be a record breaker for seedlings planted in British Columbia. The number is 265 million. That is bigger than the largest peak number from back when the Forest Practices Code and Forest Renewal BC walked the earth (both extinct species now) in 1996. It is hard to see through the fog of time, but some graphs show the previous record very close back then to 260-million. But other tables show something less, like 234 million. Anyway, it’s a lot of trees for this year, and maybe the last real big one for a while. Next year is tracking towards 250-million.

We’re not making it a contest to see who gets stuck in the biggest deactivated road tank trap this year. But we are collecting a photo gallery of bad examples; and there are many. The point is to persuade engineers and road managers that silviculture crews need reasonable access to blocks for their crews, seedlings and for emergency evacuation. In many cases, the examples we have collected could be remedied by instructing hoe operators on just what an F350 can drive through. The BC SAFE Silviculture Program is working with BCTS and willing licensees to come up with best practices for road deactivation and rehabilitation to avoid creating access problems. One promising set of practices for Interior road rehabilitation and ATV access can be seen at www.wfca.ca.

The BC SAFE Silviculture Program long-awaited footing and footwear study, including guidelines for selecting the right boots for work, has been released. Go to www.wfca.ca. under Features. The report recommends that employers review the report and set their own guidelines for acceptable footwear on the job. The report noted many workers are wearing boots unsuitable for silviculture work.

Paramount Pictures is looking for a tree plantation to shoot parts of a science fiction film to be shot in B.C. this year. Well actually it will be another planet, pretend-wise. But they need a tree plantation clear of lower limbs, regularly spaced and with some partial canopy closure. Sort of like the picture here, but more regularly spaced. Set designers will make the trees look like they are from another planet. We’ll leave that to your imagination. Lower Mainland or Vancouver Island are preferred sites. But they will travel farther if needs be. Not sure if they are looking for tree planters as alien stand-ins.