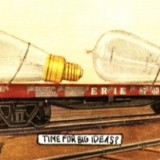 Warning: Some content in this issue contains speculation about weather and the budget. Because of the noted unreliability and unpredictability of the weather and budgets these speculations should not be considered facts.

No Pack for Snow Pack: Are we EI Neutral?

It’s a little early to start speculating about a compressed spring planting season, or another hot summer fire season. But February’s weather, so far, is providing a pretty interesting gambit. The snow pack looks scant across most of the province. This is similar to a wider trend along the whole west coast of the continent. Alaska has posted 10 Celsius lately in what should be deep winter. And much of California is in the fourth year of a drought drifting towards dust bowl conditions in many parts. Overall we seem to be in a novel weather pattern over the Pacific. El Niño and the Pacific Decadal Oscillation, a more long-lived pattern of climate variability, seem to have gone into neutral. Instead an unusually persistent high-pressure ridge off the coast in combination with exceptionally warm ocean temperatures appears to be driving the Jetstream. Are we headed into uncharted territory?

Last week’s B.C. provincial budget, which has in the past been balanced in part at the expense of government forestry investments, appears to have spared the MFLNRO’s Land Based Investment Strategy (LBIS). The LBIS investments, which include the Forests For Tomorrow (FFT) program will continue at $62-million for fiscal 2015-16, according to the Forest Practices Branch which oversees the program. Meanwhile some optimists are speculating the apparent budget surplus—forecast to be as high as $1-billion—might be used to refund fuel management programs in the province’s wildland urban interface. Treasury stopped funding the program last year. But that is, well, speculation. By optimists, as you might expect.

Meanwhile the Throne Speech delivered earlier in the month mentioned forestry, something rare in these kinds of pronouncements. Government referred to increasing lumber sales to China, the pending Softwood Lumber Agreement negotiations, and the implementation of recommendations of an external review of BCTS’s role and effectiveness. The latter which, with its narrow focus, has not exactly been surrounded by blazing publicity—the opposite actually—seemed a little out of place. In the scheme of things it could be minor compared to the implications of the Tsilhqot’in Supreme Court decision, the pending closure of more sawmills across the province, the growing losses to wildfire and, well you know, all those other pressing forestry challenges that might have warranted mention in a speech about government priorities.

British Columbia’s professional foresters challenged themselves at their recent Association of BC Forest Professionals annual conference to better manage the province’s forests. With recent reports and events casting doubt on relying on professionals to reliably perform in the public’s interest, foresters speaking at the conference described the tension between their role as professionals, the expectations of their employers and clients, and the limits of current forestry regulation and practice. For some foresters the level of forestry acceptable to the public as laid out in regulation falls short of the kind of excellent forestry we could be practicing. Others cited the lack of a clear mission and specific regulation for forestry today as factors adding to the uncertainty around what is in the public’s best interest. It seems the ABCFP’s new council would have their work cut out to address these critical matters of professional performance and social license in forestry.