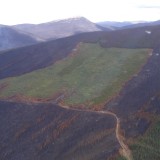 December 5, 2014
Vol. 14, Issue 21
Warning: Some of the facts in this article may become true in the future. Verification may require the use of black holes.

As nursery workers across B.C. lift, wrap and store seedlings for next year’s winter and spring planting season, licensee foresters, nursery operators, contractors and workers met in Merville on Vancouver Island to discuss the links between healthy seedlings and healthy workers. It turns out the two goals are not mutually exclusive; particularly in cases where we can eliminate requirements to screef to mineral soil and over-tamp seedlings. The session, part of the BC SAFE Silviculture Program’s strategy to reduce silvlculture MSI rates, looked at the problem of heavy boxes and water-logged seedlings and discussed ways to reduce repetitive strain injuries, which costs the sector $1.6 million annually in claims.

The Province gave an overview of its new Canada-BC Job Fund to stakeholders last week. Most relevant and potentially helpful to silviculture employers is the Canada-BC Job Grant described as “Employer driven, cost-sharing program to train new or existing employees for in-demand jobs.” The program provides up to 60% funding for training tuition costs. Eligible employers must have a job available at the end for trainees. Nevertheless, there are a lot of program details to be sorted and it is not clear exactly how seasonal employers fit in the program; something the WSCA is paying close attention to through its Labour Market Partnership contacts. The program will see up to $39 million available annually over the next six years. Stay tuned.

We may need a lot more of the above heading into the future according to a just-released Wildfire Management Branch discussion paper on Proactive Wildfire Threat Reduction. We are already seeing wildfire rates of spread up to three times faster in beetle-attacked stands. But Climate Change will create markedly severe wildfire conditions, particularly in the South Interior by 2080 including:

•increase in crown fire ignition and severe fire behaviour by 4% to 7%, and~

•a decrease in extent of fire free areas by 39%.

Brian Simpson, Executive Director of the Wildfire Management Branch, will explain the report and speak to the advantages of wildfire threat reduction at the WSCA 2015 Annual Conference and Tradeshow to be held in Victoria, 4 – 6 February, 2015.