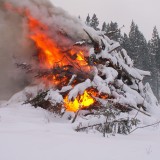 November 7, 2014
Vol. 14, Issue 19
Warning: Some facts found in these contents may themselves contain facts increasing readers’ total exposure to facts.

Figures tracking the volume of BC wood scaled and the products produced result in having to compare a macaroni of units; board feet, cubic meters, gigajoules etc. That can make it a bit of mystery as to where the harvested fibre finally winds up. But researchers at the MFLNRO have sorted it out. As you would expect (and hope) the majority goes to lumber, paper, panel, pulp, pellets etc. But initially researchers found a large amount of wood and bark going unaccounted for.

Further research showed that large gap (the grey zone on the graph) was being used primarily to produce bio-energy at production plants. Quite a lot in fact, which has to be a good news story for the industry.

But there is more to it:

Most any forestry worker will tell you the bio mass story is not complete without considering the slash everybody walks over on the blocks or sees piled at the road side. As we write this, crews are burning roadside piles (and snow) all over the province. That volume of residuals is estimated by MFLNRO to be in the order of over 5 million tonnes annually. You don’t need a slide rule to figure out that is a lot of greenhouse gas. It is also a huge waste of energy.

But that may be the good news story. What if we were able to take this bio-mass and convert it to diesel and aviation fuel? Add to that the additional millions of tonnes the beetle-attacked forest has produced and we have that new bio-energy industry we have all been waiting for.

The BC BioEnergy Network thinks that recent breakthroughs in the commercial production of coal substitutes and fuels from wood fibre could make an expanded and profitable stand-alone bioenergy industry a reality in BC. The Network’s Executive Director Michael Weedon will speak at the 2015 WSCA conference 4-6 February ‘15 describing this huge potential and its possible impacts on forest restoration and the silivculture sector.

This week silviculture workers, supervisors, owners and emergency response experts work-shopped opportunities to reduce the consequences of serious injuries to workers on remote sites in the silviculture sector. WorkSafeBC, the BC Forest Safety Council and the silviculture industry see reducing risks to workers due to delays and gaps in appropriate emergency response and treatment on remote sites as a key safety objective for the sector. The outcomes of this exercise will form the basis of next year’s BC SAFE Silviculture Program work plan to be presented at the WSCA conference annual conference in Victoria early in the new year.