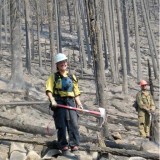 Aug 29, 2014
Vol. 14, Issue 14
Warning: Use of any facts found in these articles should not be attempted at home unless qualified supervision is present. Results may vary.

It’s mostly good news, finally, for fire suppression contractors this summer as large and tenacious wildfires persist across the Cariboo and North West. It has been years since suppression contractors, who work through a standing offer agreement with MFLNRO, have been called up in substantial numbers to support government Wildfire Management Branch crews. Owners report they were having difficulty recruiting and retaining good workers, as well as dealing with keeping their own businesses above water during previous quiet years. Figures vary, of course, with each day, but the rough numbers show that of the approximate 2800 to 3000 firefighters deployed through August, 600 to 700 came from firefighting contractors. The private sector supplied another 300 in related support. And out-of-province government crews numbered around 400 to 500.

Even though the rate group the tree planting sector is pooled in has kept its costs more or less flat, the classification unit base rate will rise from $2.77 this year to $3.25 in 2015. Other rate groups may be benefitting from increased returns on WorkSafeBC investments, which translate into lower base rates. Nevertheless, the tree planting industry is saddled with being undercharged for years in its previous rate group. In 2016 WorkSafeBC estimates the sector will see another rise by as much as 20% to pay down the accumulated deficit. Meanwhile wildfire fighting will drop next year from $7.44 to $7.16. Brushing and tree thinning is expected to drop from $7.96 to $6.85 in 2015.

The BC Silviculture Workforce Initiative is now conducting its annual worker and contractor survey to see how this year’s season measured up to expectations and to track critical workforce and business trends. Contractors are urged to step up and help directly in expanding the reach of this annual exit poll by providing employee lists directly to the polling firm. They will benefit then with the option to have a customized view of how their workers rate them as employers compared with the broader industry trends. Contractors can participate by going to http://fluidsurveys.com/s/2014Employers/ Workers who aren’t directly contacted through their employer can get in touch at http://fluidsurveys.com/s/2014Employees/ There are cash prizes drawn for participants.

The government this week released its anticipated report on converting to area-based tenures. The document authored by Jim Snetsinger contains 35 recommendations. But it may be some time before government acts on any of them. In an indicative statement Minister Steve Thomson said, “… given the recent Supreme Court of Canada Tsilhqot’in decision and requests from forest companies and communities to focus on key immediate priorities, the ministry will not be proceeding with legislative changes that would enable forest licence conversions in fall 2014 or spring 2015.” A copy of Snetsinger’s report is available on line at http://engage.gov.bc.ca/foresttenures