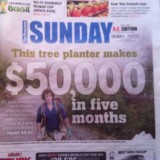 In this edition Khaira workers win discrimination case, workers need better work gear, the BC Silviculture Workforce releases its report on the silviculture industry, silviculture workers get good press, and some stuff on tree planting fashion, sort of…

The BC Human Rights Tribunal has ordered Khaira Enterprises to pay workers $10,000 each plus $1,000 for each month worked for racial and gender discrimination they suffered while planting trees for the company in 2010. There is little chance owner Khalid Bajwa will come up with the nearly $700,000 in total, as he stills owes $130,000 in unpaid wages previously assessed by the BC Employment Standards Branch. The Tribunal found the workers were treated “akin to slaveship.” Problems continue for many of the African crew regarding eligibility to collect EI for the time they worked for Khaira. Absurdly, Canada Revenue Agency has assessed them taxes for the earnings they were never paid. Meanwhile Mr. Bajwa still faces fraud charges in Provincial Court. On the bright side some former Khaira workers are planting trees today in B.C. and were reportedly happy to hear of the ruling and the recognition it gave to the wrongs they endured.

Silviculture workers picked up some good press in last weekend’s Sunday Edition of the Vancouver Province with an optimistic front-page cover story about what it takes to make big money planting trees. The three page life-style piece give a fair account of the various conditions and illusions workers share, emphasizing that planting trees, for its pains, offered a good opportunity in an otherwise depressing youth job market. Go to The Province’s Website to see the story.

The BC Silviculture Workforce Initiative released a major labour market report this week describing the demographics, disposition and expectations of the province’s silviculture workforce and its employers. The wide-ranging analysis estimates the total silviculture workforce to be around 7500, with 3500 working as tree planters, and the balance spread primarily between brushing, spacing and fire fighting. The WSCA, which initiated the study, stated the report will help the silviculture industry get overdue recognition for its contribution to the BC economy and its creation of legitimate forestry occupations for seasonal workers. To download go to www.wfca.ca

First impressions from this spring’s BC SAFE Silviculture Program field interviews with tree planters suggest that workers are not all that well served by the availability, durability and price of boots and other work gear. Most of the clothing and equipment used by workers is adapted from other industry sectors and the recreational business. By many accounts very little of that stuff can stand up to the extreme wear and tear of normal planting work. Boots, even expensive ones, wear out quickly on the job. Gloves don’t protect all of the hand. Gators could be designed to protect and fit better. At the same time, the creative adaptions some workers have implemented with existing gear suggest ways to design better equipment.

The release of the much-anticipated lululemon line of tree planting work wear has been delayed. Troubles continue with the new fabric, an experimental mix of lycra and graphite. Field trials have shown problems with thigh chafe and fabric pilling when in contact with tree bags. A previous attempt to weave fine steel wool into clothing was deemed a failure when it began causing sparks and overheating. Rumours that fashion models testing the fabric actually caught fire have proven exaggerated.

To have our bi-weekly Rumour Mill delivered straight to your inbox, send us an email at admin@wfca.ca.