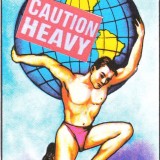 The advent of summer will see approximately 193.5 million seedlings planted so far this year in B.C. That leaves another 48.2 million to plant over summer. And another 2.8 million seedlings for the fall. That’s 244,621,000 in total. Or about 70,000 seedlings for each of the estimated 3,500 planters in the province. That means the industry has been idling at about 120 trees planted per second since the Interior got going in April. Measured in pyramids 2014 will be the ergonomic equivalent of picking up Cheops and putting it down once. But who would do that? I mean put it back down. Once you got it off the ground wouldn’t you want to move it around somewhere else, just for fun?

Whether saturated bundles and overweight boxes are an intermittent stock handling nuisance, or an ongoing worker health hazard, or both, there has been enough concerns raised to sponsor a working group to investigate. Planting supervisors, nursery managers, licensees, and seedling experts have begun exploring ways to better manage the water content of seedling stock and their weight in boxes. Generally seedlings take on extra water when they are grown outdoors and exposed to the vagaries of fall weather before lifting and storage. One of the challenges is that due to the nursery processes involved, it may not be as simple as just imposing a weight limit on boxes.

– A BBC film crew has gone home after documenting for a month whether three British rookies had the grit to survive planting trees in B.C. The World’s Toughest Jobs is still in production and will air, if all goes well, next year. So we may have to wait until then to find out.

– A tree blew over on a tree planter’s tent in a commercial campground near Prince George breaking his ankle; fortunately.

– A planting supervisor stopped to pee recently on the edge of a cut block near MacLeod Lake and was astonished when she felt warm breath and a nose touch the side of her face. Unnoticed, a black bear had come up beside and nudged her. The young animal was just curious, apparently. The supervisor reported it took some time to compose herself and eventually shoo the bear off the block. It seemed to find the supervisor and the planting work interesting.

– The Western Silvicultural Contractors’ Association will hold its annual 2015 Conference, AGM and Trade Show next year in Victoria, B.C. February 4th through 6th at the Inn at Laurel Point. Watch for future postings on the program and registration at www.wfca.ca.

To have our bi-weekly Rumour Mill delivered straight to your inbox, send us an email at admin@wfca.ca.