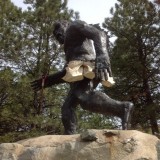 In this mid-season RoundUpDate we hear how hiring Bigfoot gives a competitive advantage, how to keep your knees in good shape, the WSCA’s application to have silviculture service contractors eligible for compensation if their clients fail, the WSCA’s position on Area Based Tenure and the annual tree planters ball in Merrit next month.

Tree planters report a giant hominid appeared out of the woods in the South Interior recently and began clearing planting sites with its feet. The contractor involved said the large mythical ape played a major part in keeping quality and production in line with demanding screefing requirements. Unfortunately the hairy addition to the crew would not stop boot-screefing and had to quit due to knee problems. WorkSafeBC would not comment on whether it could recognize a lost time claim for a silviculture worker possibly not from this space-time continuum.

Speaking of knees, they play a pivotal part in silviculture worker health and productivity. Now workers can increase their chances of these critical joints standing up better to wearing, tearing and load bearing by following advice from Dr. Delia Roberts. A digital pamphlet is available on Dr. Roberts most excellent Facebook page, where she describes how to prepare and maintain knees before and during the season while fielding questions from workers too.

In 2010 the government created the Forestry Services Providers Compensation Fund through an Act designed to provide relief to eligible forestry contractors who went unpaid when a forest harvest license holder became insolvent. Silviculture service providers, including contractors and seedling nurseries, are not at the moment eligible to apply to fund. The WSCA has written the minister asking that he expand the Act’s definition of forestry service provider to include the silviculture service sector. Go to www.wfca.ca to read the letter.

The WSCA has met with Jim Snetsinger head of the government’s Area Based Tenure Consultation process and given qualified support for moving some volume based licenses to area-based tenures. The WSCA emphasized that any strategy to create more tree farm licenses in the province must lead to a higher standard of forest stewardship in the province. Government must also guard against creating further consolidation among license holders, which would adversely effect competition for forestry services. The briefing note is available at www.wfca.ca

This annual event, now in its seventh year, promises good clean fun with the proceeds and contractor donations going to various worthwhile causes in the community. For more information contact Ben Howells at benhowells0@gmail.com