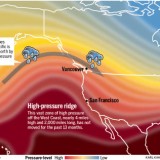 Remember how the climate deniers went after Stephen Chu, Obama’s first Energy Secretary, when Chu described Climate Change’s threat to California agriculture? Given the importance of California agriculture in supplying the fruits and vegetables that Americans have come to expect all winter long, the current drought is something that could have significant impact on American’s pocket books.

In a worst case, Chu said, up to 90% of the Sierra snowpack could disappear, all but eliminating a natural storage system for water vital to agriculture.

“I don’t think the American public has gripped in its gut what could happen,” he said. “We’re looking at a scenario where there’s no more agriculture in California.” And, he added, “I don’t actually see how they can keep their cities going” either.

A pair of recent studies raise similar warnings. One, published in January in the journal Science, raised the specter of worldwide crop shortages as temperatures rise. Another, penned by UC Berkeley researchers last year, estimated California has about $2.5 trillion in real estate assets — including agriculture — endangered by warming.

As California struggles through a run of historically dry weather, most residents are looking at falling reservoir levels, dusty air and thirsty lawns.

But meteorologists have fixed their attention on the scientific phenomenon they say is to blame for the emerging drought: a vast zone of high pressure in the atmosphere off the West Coast, nearly four miles high and 2,000 miles long, so stubborn that one researcher has dubbed it the “Ridiculously Resilient Ridge.”

Like a brick wall, the mass of high pressure air has been blocking Pacific winter storms from coming ashore in California, deflecting them up into Alaska and British Columbia, even delivering rain and cold weather to the East Coast. Similar high-pressure zones pop up all the time during most winters, but they usually break down, allowing rain to get through to California. This one, ominously, has anchored itself for 13 months, since December 2012, making it unprecedented in modern weather records and leaving researchers scratching their heads.

“It’s like the Sierra — a mountain range just sitting off the West Coast — only bigger,” said Bob Benjamin, a forecaster with the National Weather Service in Monterey. “This ridge is sort of a mountain in the atmosphere. In most years, it comes and goes. This year it came and didn’t go.”

The current high-pressure ridge is even stronger and more persistent than a similar ridge that parked over the Pacific Ocean during the 1976-77 drought, one of the driest in the 20th century.

Scientists know that changes in temperature cause high- and low-pressure zones around the world. In many ways, air works like water. The deeper you swim in the ocean, the stronger the water pressure, because the weight of the water above is pressing down on the water below. Air in the atmosphere also has weight, and as temperatures of the ocean and land fluctuate, the atmospheric pressure also changes, helping drive much of our weather.

What researchers don’t know, however, is why the current high-pressure ridge is so persistent, or when it is going away, allowing California to enjoy some much-needed rain. A few scientists say that it may be related to climate change, but nobody knows for sure.

“I wish I had a really good answer for this,” said Daniel Cayan, an oceanographer and atmospheric scientist with the Scripps Institution of Oceanography in La Jolla. “It’s unusual for the pattern to have not broken down to allow some relatively active, vigorous winter storm systems to track across California.”

Last year was the driest calendar year in recorded history in California in most cities, with records going back 160 years. The first snowpack reading in the Sierra Nevada earlier this month found a snowpack of just 20 percent of normal.

Meanwhile, major reservoirs in Shasta and Oroville are each 36 percent full, about half of normal for this time of year. San Luis Reservoir near Los Banos is 30 percent full, 42 percent of normal. Major Bay Area water agencies haven’t yet called for mandatory summer water restrictions but are expected to make the decision in the next month or two, depending largely on whether the high-pressure ridge breaks down and rain falls.

State Department of Water Resources Director Mark Cowin told members of the California State Board of Food and Agriculture in Sacramento a week ago that his agency is likely to recommend that Gov. Jerry Brown declare a drought by Feb. 1, which would make it easier for water transfers between agencies and for emergency loans and other assistance.

On Monday at a news conference in Fresno, Brown told reporters, “It’s coming. Just be patient.”

All is not lost. Experts note that California still has another two or three months left in its winter season.