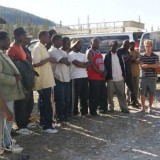 Khaira Enterprises Ltd. will be back before the B.C. Human Rights Tribunal this week facing allegations that it kept forestry workers in slave-like conditions at a remote camp near Golden.

The company’s practices have been the focus of the hearings. But the operator had a silent partner – the provincial government.

Government documents, some never before publicly released, chronicle how an arm of the Ministry of Forests repeatedly hired the company to do forestry work despite concerns about substandard camps, because Khaira underbid its competitors.

Before a group of workers was found stranded in the bush – hungry, injured, and without pay – in July of 2010, government officials had some strong clues about how Khaira managed to keep its costs down.

Documents recently released through Freedom of Information show the company had been cited for shoddy work in 2008. “It is my opinion and experience, Khaira is not capable of successfully managing and completing large planting contracts. We gave them lots of chances to improve [too many in hindsight],” wrote a government official. The company was suspended from bidding on planting contracts for two years.

In 2010, the company won another tree-planting contract from the government’s B.C. Timber Sales (BCTS) office and set up camp on Texada Island. Even before work began, concerns were raised about the company’s low bid and its ability to carry out the work on steep terrain with an inexperienced crew.

Click on the link below for the full story