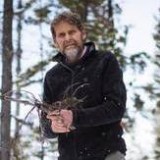 Fat pellets of snow are dusting a 130-year-old forest of pine and spruce as John Betts leads a small group through the woods. The elevation is 1,100 metres and spring has not reached here, the fresh coat of white making a pretty picture. But this is Mr. Betts’s tour of doom, and he sees instead a powderkeg that threatens the nearby communities of Kamloops, Merritt and Quilchena.

The mountain pine beetle bored through this forest south of Kamloops seven years ago. The government inventory, conducted in 1991 and updated in 2007, shows little reason for alarm: On paper, about a third of the trees here have suffered beetle kill. But Mr. Betts, head of the Western Silvicultural Contractors’ Association, wants to show that on the ground, the state of this forest is far worse.

Where the dead trees have fallen, they form a tangle chest-high in places.

The wood is tinder dry: Because the debris is so thick, it is not soaking up ground moisture. “You are creating a ground fuel matrix. It’s an unusual condition for the forests, and it’s so widespread – the potential is for catastrophic fire.” Mr. Betts describes fires so intense that they cannot safely be fought, and so hot the ground is left sterile. “You’ve got to get rid of this stuff.”

This stuff was once the backbone of the Interior forest industry.

Across the province, the pine beetle infestation has left behind an estimated 15 million hectares of dead and degraded forests. While the Interior saw mills are busy processing the dying trees, much of it remains.

For full story, please click on the link below.