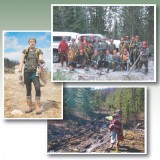 A recently completed study of the seasonal workforce that plants seedlings and tends forests in British Columbia estimates there are 9,000 silviculture workers employed in the province. That figure makes the reforestation industry a much larger component of the BC forest sector workforce, estimated to be around 50,000, than previously estimated. The report funded by the MFLRO Resource Practices Branch in cooperation with the WSCA is the first empirical attempt to estimate the number of silviculture workers in the province. It is part of larger effort to gauge the economic impact of forestry investments in the province and to build a human resource strategy to recruit and retain reliable employees.