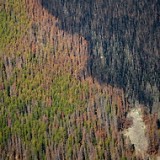 As Justin Gillis explained at length in an Oct. 1 article, huge tracts of forest are dying across the West and around the world as a result of infestations and other phenomena that many link to climate change. A big question for those who manage forests is how these millions of acres of dead trees will respond to wildfire.

For one thing, men and women are dispatched to the fires to protect life and property, and knowing how a fire will behave in a dead forest is crucial to fighting or containing it and keeping people safe.

The last few years of computer modeling of fire behavior in dead forests indicated that wildfires would not turn into crown fires as readily there as they do in forests of living trees because many of the dead trees have lost their needles. Crown fires are the hottest, fastest-moving and deadliest of all forest fires.

It turns out, however, that the behavior of fires in the real world is different from what the models suggest.

Last summer was the first in a few that was dry enough for some moderately serious wildfires. William Jolly, a Forest Service research ecologist with the Rocky Mountain Research Station’s Fire Sciences Laboratory in Missoula, Mont., had a chance to study them closely.

Even under the moderate fire conditions of last summer, he said, blazes in forests with lots of dead needle-less trees turned into crown fires, which is sobering.

Mr. Jolly studied the Saddle Complex fire on the border of Montana and Idaho. In one day alone, the fire burned 17,000 acres. “For a year like this year, not in extreme drought, it’s really uncommon” for a fire to burn that much, he said. “It was equally as intense as a normal crown fire but happened under moderate conditions.”

“And crown fires happen faster than expected” in these largely dead forests, he added.

For fire bosses, the spread rate of the flames is an important consideration. The Saddle Complex fire moved very rapidly, which Mr. Jolly found startling. “A mile an hour is fast for a timber fire,” he said, “and there were reports that this fire was moving at up to three miles an hour. That’s like the spread rate in grass.”

Fortunately, there were no injuries from the fire. “They definitely had some close calls this summer because the fire did something they didn’t expect,” Mr. Jolly said. “They have to learn what the context is for this different type of fire behavior.”

One reason that dead forests still have fierce crown fires may be that, with the forest canopy dead and the needles gone, more solar radiation reaches the smaller live trees and grasses on the ground, which dries them out and exposes them to more wind, resulting in fiercer fires.

Not all dead forests are equally combustible. The mix of dead and live trees is critical to fire behavior, and more study is needed on the nature of the most flammable mix.

Big fires also create their own weather, and research is needed on how the weather generated by a burning forest with a lot of dead trees differs from the weather created by a fire in a living forest.

The observations that Mr. Jolly and others made this summer are similar to those reported in recent years by fire experts in Canada, where dead forests are even more widespread and conditions have been hotter and drier and more conducive to fires than in the United States. “They say the same thing,” he said. “The fires move very rapidly and are very intense.”