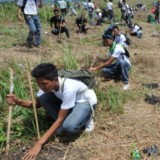 Speedy tree planting may be the answer to the world’s dwindling forest problem. This past Thursday, over 64,000 trees were planted in 15 minutes, breaking the world record for the most trees planted simultaneously.

Conservation International reports that these threatened forests store over 25 gigatons of carbon. Meanwhile, 15% of the world’s greenhouse gas emissions are due to deforestation. In an effort to protect the world’s forests, and in turn, protect all citizens of the world, the UN has proclaimed 2011 the International Year of Forests.

Some countries are making positive steps towards reversing the damage of deforestation. According to the BBC, China, Vietnam, the Philippines, and India are increasing their forested areas. China has reportedly increased its forests by an unprecedented three million hectares per year.

But many conservationists are concerned that old-growth forests are still disappearing as new forests are deliberately planted. As Conservation International’s Olivier Langrand explains, “Forests must be seen as more than just a group of trees.”