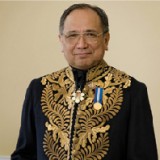 British Columbia’s Lieutenant-Governor Steven L. Point urged foresters to act upon their public responsibility to ensure good and sound forestry in the province. He made his comments in a moving and deliberate address to the 2011 conference of the Association of BC Forest Professionals.

Using the poignant image of baldheaded eagles recently feeding at the Delta landfill for want of salmon, he cited the extinction and degradation of various native species and natural resources throughout the province’s history. He made it clear he did not want to see B.C.’s forests suffering a similar fate.

“You have the ability to communicate about forests to the public in this province. You have an important role to play in the care of the forest. I urge you to do that,” he said in summation to the audience of 200 foresters from across the province who met in Vancouver late February.

A former Provincial Judge as well as Chief Commissioner of the British Columbia Treaty Commission the Lieutenant-Governor spoke without notes, using his personal and affecting oratory style and drawing upon his experience as an elected Chief of various B.C. First Nations, Governments and Councils.

The Lieutenant-Governor’s exhortation came at a time when there appears to be a broad groundswell of frustration and concern from many foresters, civil servants, community leaders and some politicians around the deteriorating condition of forestry and the forests of the province. Some of those sentiments made it to the ABCFP conference floor where there was obvious tension and differences as to what advocacy role the association should assume concerning forest policy and politics.