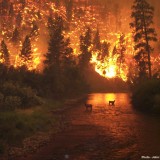 Prepare yourself for this year’s upcoming fire season: It is going to be a mild one.

At least, that is what state and federal officials said in a briefing yesterday at the Department of Agriculture. So far this year, about 1.3 million acres have burned — average for this time of year, according to the National Interagency Fire Center (NIFC).

NIFC, which does not have a director of its own, coordinates the firefighting efforts of eight organizations and federal agencies, including the Department of Homeland Security and U.S. Forestry Service.

Interior Secretary Ken Salazar said that the incursion of exotic weeds poses a threat to fire safety by significantly increasing the fuel stock where those plants did not previously take root. Forest fires are burning earlier in the year, for longer periods of time and at higher elevations than federal agencies were accustomed to, he said.

Federal agencies currently have $500 million allocated for the regular account of fire suppression funds and an addition $61 million through a separate FLAME account should normal funds be depleted. The account was established as part of the FLAME Act 2009, which allowed budget allocations for fire suppression to be determined by prior-year data, such as fire suppression expenditures and predictive modeling. Previously funding was determined by a 10-year rolling average.

In 2008, the U.S. Forest Service spent more than 50 percent of its budget putting out fires, according to the National Association of State Foresters. Last year, about 80 percent of wildfires happened on state-owned land. And, in every year for the past 10 years, fire suppression costs have exceeded $1 billion.

The destruction of 5.2 million acres in 2008 rose more than $2 billion in costs and damages, according to the National Oceanic and Atmospheric Administration.

More fires and longer burns Climate change, Salazar said, also presented a growing threat to many parts of the country.

“Wildfire is a natural part of the western landscape,” read a 2007 report by the Pew Center on Global Climate Change, but “in recent decades, a trend toward earlier spring snowmelt and hotter, drier summers has already increased the number and duration of large wildfires in the West.”

NIFC meteorologist Rick Ochoa, also at the briefing, said that while some regions experienced a wetter winter — due, in part, to the effects of last year’s El Niño — the resulting new vegetation is now at risk of drought. The drought makes those plants particularly susceptible to fire.

The wet winter in the Northwest, Ochoa said, most likely pushed the region’s normal fire season to August, rather than July.

However, large portions of Nevada, where new grasses and other plants grew in response to the unusually wet winter, could see significant threats if drought conditions continue. The Southwest, in general, Ochoa said, is currently going through “very dry conditions” and will most likely become fire-active in July.

Snowpack was also lighter than normal in Colorado, which depends on mountain meltwater for much of its freshwater. The lack of water in the state could present more stresses to any future fires in the area.