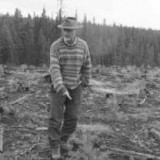 By plane, large spots of red spread like a bad case of the measles through B.C.’s forests.

Pine beetle have spread their ways through most of B.C.’s forests killing pine trees at an alarming rate. What is being done?

The provincial government would have us believe that they are replanting the forests with healthy young seedlings at exponential rates, but are they? This is where the knowledge of the silviculture industry is more than handy, but crucial to British Columbians. Chris Akehurst is a silviculture contractor. He has been in the industry for over 30 years watching the ebb and flow of government after government as they shift their priorities from forest to something else and then back again. He worries about B.C.’s future.

Akehurst is co-owner of Akehurst & Giltrap Reforestation. A&G was founded in 1997 by Chris Akehurst and Graeme Giltrap after the dissolution of another reforestation company O&G. There is no doubt that Akehurst and Giltrap care about the future of B.C.’s forests. Their company has built a reputation all across Canada as being one of the best silviculture companies to work for. They have a fantastic track record for fulfilling contract obligations on their tree planting sites. Tree planters from Eastern Canada come to plant for A&G.

Tree planters are sent into the forest in early April and work until the end of June Sometimes longer depending on many factors. Weather, elevations, logging sites and other issues are part of the overall equation. Akehurst said that, “11 million trees are being planted in the Merritt Timber Sales Area this year with 3.5 million trees being planted by Princeton based crews.” Logging companies have an obligation to reforest wherever they log and the most efficient way to do that is a year or two after the logging operation has come and gone.

A trip into a cutblock contracted out to A&G for reforestation was a good chance for Mason Squakin from the Upper Similkameen Indian Band to observe some of the challenges and issues that arise during the silviculture process. Squakin is on the board of directors of STEWIX. The USIB and Merritt bands are all a part of STEWIX. USIB and A&G Reforestation have a Memorandum of Understanding in place and Sqaukin visited the site to observe and educate himself on current practices. Some USIB members are tree planting with A&G Reforestation and the partnership has been good for the two entities.

The reason Akehurst gave a tour of the areas undergoing tree planting was to bring awareness to B.C.’s forests and celebrate the work they are doing. While the logging companies are replanting their cut blocks, there are more and more cut blocks being directly effected by the pine beetle and fire. The logging companies are only responsible for replanting their cut blocks that they have logged, not the trees lost to fire or insect infestation. These trees become the responsibility of the provincial government. As the onus to reforest is heaped into the laps of the government, Akehurst is watching a serious slide in the reforestation process.

“We think that the province could be doing more,” said Akehurst. In 1989, 298 million trees were planted in B.C., in 2007 265 million, in 2010 less than 180 million trees will be planted and in 2011 plans are for only 150 million trees to be planted. “The public needs to know this,” stated Akehurst. “People know about the pine beetle and assume that it is being taken care of, but it isn’t. Not in the numbers we need. We have the capacity to grow and plant 350 million trees a year. We will be operating at half this capacity next year.”

As a director of Western Silvicultural Contractors’ Association, Akehurst has vast knowledge of B.C.’s forest problems. Over 15 million hectares of B.C.’s forests have been impacted by the mountain pine beetle and estimates are that between three and six million hectares will require tree planting. This will require over six billion trees to be planted in B.C. and that not a target that is being met right now. Since 1971, six billion trees have been planted in B.C.. B.C.’s forest health has been in serious jeopardy for years and the stands of dead trees need to be addressed and soon. The Provincial Governments Zero Net Deforestation policy does not address beetle kill forests or forests attacked by fires, so their is a huge void in government forest management.

Healthy trees are an enormous part of B.C.’s economy. The silviculture industry generates around $700 million annually. Healthy forests have a domino effect on the tourism industry and the forest industry. “The B.C. government’s plan to address the problem will only deal with an insignificant fraction of the area which requires tree planting and it will take 20 years to complete,” states the WSCA in a press release.

“Companies like Weyerhaeuser and others around this area are very diligent about reforestation,” said Akehurst, “but alone what they are doing is not nearly enough. The public needs to realize the state of our forests in general. We need to do more to get our forests replanted.”