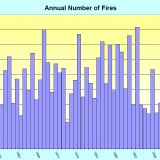 In concert with the BC Wildfire Management’s weekly wildfire report the WSCA offers a set of statistics interpreting the fires in terms of energy released, values lost, greenhouse gases emitted, silviculture required and the BC carbon tax collectable. These figures reflect some of the immediate effects of the 2009 fires on the province’s environment and economy.

Please open the PDF document linked above to view data pertaining to the current wildfire situation in BC and to compare this fire season to fire seasons going back as far as 1953.

Attached is this weeks update of the interpretation of the MOF Weekly Fire Situation report.

Another week, 9-million more seedlings needed to mount a silviculture response to this year’s fires.

Another week, 6-million more tonnes CO2e of Greenhouse gases, 28-thousand tonnes of PM 2.5. Or the equivalent of emissions from another 1.2-million cars.

Eight more years at this annual rate of forest consumption and we won’t have to worry about writing Community Wildfire Protection Plans.

More than halfway through September and we have still got 404 fires burning in the province. So far this is the 12th largest number of fires since 1953, the 7th largest area burned since 1953, and the second largest direct fire fighting costs since 1953.

* area burned to-date is 212,587 ha – that would be an area about the size of Luxembourg.
* direct fire fighting costs to-date are $341-million – that would be a little less than the GDP of the Dominican Republic
* volume destroyed to-date is about 63-million m³ – that is about 4 times larger than the Annual Allowable Cut of Austria.
* the energy release, if it could have been captured, would provide domestic heating requirements for 1-million homes – enough for 80% of the residential dwellings of the entire province.
* greenhouse gas emissions to-date exceed 87-million tonnes CO2e – this exceeds Environment Canada’s estimate of human caused emissions from BC of 65-million tonnes CO2e.
* these GHG emissions are the equivalent of 17.4-million passenger cars – 8 times greater than the entire passenger car fleet of BC.
* the PM 2.5 emissions are the equivalent of 102-million diesel trucks – 150 times greater than the entire commercial vehicle fleet of BC.