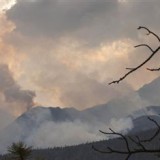 VANCOUVER — A near-record forest fire season in B.C. has been exacerbated by the federal government backing away from providing millions of dollars to reduce the threat of pine-beetle-killed wood, a first nations group said Thursday.

The federal money could have been used to help clear the dead wood, providing firebreaks that could have prevented the blaze from coming within hundreds of metres of communities, B.C. First Nations Forestry Council vice-president Bill Williams said.

But hundreds of millions of dollars earmarked for the pine-beetle program disappeared from this year’s federal budget, replaced by an economic stimulus plan that barely mentions the beetle crisis.

The money has instead been used for purposes such as assisting those who lost their jobs in the forest sector and improving infrastructure.

“You take the beetle kill and you put it together with the highest temperature in Canada — 42.1 C — and zero humidity and you’ve got a major catastrophe just waiting,” he said.

“There hasn’t been much progress” on dealing with the pine-beetle devastation, he added.

In 2005, as opposition leader, Stephen Harper promised that a Conservative government would provide $1 billion over 10 years to control the mountain pine beetle. In 2006, the federal government budgeted $400 million over two years and another $200 million in 2008 to control the spread of the beetle, figure out how to gain value from the dead wood, protect the forest and communities and invest in infrastructure to improve the economy in areas hurt by the infestation.

But the 2009/2010 federal budget merely mentioned pine-beetle infestation as part of the economic stimulus plan and did not specify a dollar figure.

Natural Resources Canada spokeswoman Patti Robson said in an e-mail that “the government is delivering on its commitment to fight the mountain pine beetle,” citing figures from the budget.

But Robson’s e-mail made no mention of cleaning up beetle-killed wood.

Williams said no one will tell him how much money from the economic stimulus plan will go toward fire protection related to the pine-beetle devastation. “The forest is still burning,” Williams said.

“The communities are still devastated. The forest economy of British Columbia is down the tubes. What more has to happen in order to create the need for the federal government to help than that? It’s really appalling and astounding.”

The wildfires forced thousands to evacuate their homes, including 6,000 in West Kelowna and more than 2,000 in Lillooet.

Burning embers in such areas spread further and faster, both along the ground and in the treetops.