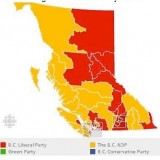 Half the electorate stayed home: but it wasn’t just eligible voters that were absent from the 12 May election.

Missing as well were any political thermals capable of raising the election discussion to the level of intensity that the general situation these days might have demanded: forestry and the environment being two deserving matters that come to mind. Instead the electorate seems to have opted for not changing much. It seems we’ve voted to hold the fort as a hedge against the numerous uncertainties the province faces. But history won’t necessarily be fooled because the same government is back. I have the feeling the next four years—to say nothing of the next four months—will be anything but the same.

In forestry we won’t know until early June if Pat Bell, who won his seat convincingly (with just 51.25% of the eligible voters in his riding turning out), will return to his post as Minister of Forests and Range. In our last meeting with him just prior to the election he was convinced that he would be back in the summer to follow through on his new vision for forestry and silviculture. The then Minister indicated he particularly wanted to work with the WSCA to realize his government’s goal to make the province a world leader in reforestation. We are preparing now to respond to the Minister’s discussion paper on forest policy and are looking forward to participating in his proposed working group to advise him on silviculture issues and strategies. Our prime goal is to assist this government in meeting the expectations they have raised.