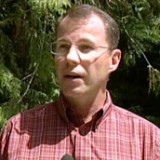 Also, have a look at the attached video ‘Tom Hobby.asx’ from CBC TV News.

Many communities in the B.C. Interior are at significant risk of potentially catastrophic forest fires this summer, because critical prevention work promised by the government has not been done, a forestry expert said Friday.

Forest fire fuel in the form of shrubs, branches and even pine-beetle infested trees needs to be cleared from wide swaths of the forest floor, estimated at 1.7 million hectares, said Tom Hobby, a forest economist and author of a new report Looking at the Problem.

“We’ve seen fuel hazard increasing over time, so we’re sitting on a time bomb,” Hobby told CBC News in an interview. “If we don’t do something and be proactive, sooner or later, we will have that risk executed.”

Forest fire fuel contributed to the 2003 summer wildfires that blazed through large forests in Kelowna and parts of the Okanagan Valley, Hobby said.

After those fires, the Liberal government promised to clean up the forest floors. Hobby says some of the crucial prevention work has been initiated, but it’s not nearly enough to lower the risk in this forest fire season.

“The problem has been partly economics [and] how much it would take to treat 1.7 million hectares. We would be talking billions, possibly tens or hundreds of billions of dollars,” he said.

Another problem is the size and scale of the forest floor, he said, which represents about a two-kilometre buffer around the Interior communities.

“The amount of land that’s been treated in the last five years has been just very small. The funding mechanisms haven’t really worked; part of it has been the economics in the forest sector, but also the amount of money that communities have to come up with to do these fuel treatments.”

Hobby said he hopes to bring the bio-energy sector on board to help pay for those treatments, as companies could turn low-value forest products into energy.

With warm, dry weather forecast this weekend in the Okanagan, which currently has the highest risk of forest fire, provincial fire officials are warning people to be vigilant about putting out any open fire or cigarettes.

Also, have a look at the attached video ‘Tom Hobby.asx’ from CBC TV News.