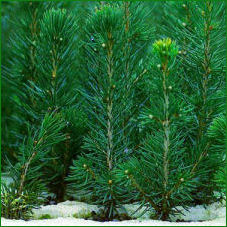 The way Robin Dawes sees it, there’s no doubt she’s a farmer.

As the nursery manager for K & C Silviculture Ltd., in Oliver, B.C., Ms. Dawes is responsible for overseeing 120 greenhouses stocked with seedlings.

This year she grew a crop of 22 million young trees, which she harvested and sent off to market. Logging companies bought those seedlings and so did tree-planting contractors.

With British Columbia’s forests in a massive die-off because of a pine beetle infestation, Ms. Dawes’s agri-business should be thriving. But it isn’t. It is struggling to survive because of a downturn in the forest industry – and because the federal government no longer recognizes silviculture as farming.

But to Ottawa, any business that grows trees just to replenish forest lands is, in effect, nothing more than a wood-lot operation. It’s forestry, not farming. That means tree nurseries do not qualify for agricultural income stabilization payments from the federal government.

The reclassification was made in 2006 when the federal government decided to phase out the Canadian Agricultural Income Stabilization Program – essentially a form of crop-failure insurance – and replace it with two programs called AgriStability and AgriInvest.

Silviculture operators, who until then had been covered by CAIS, thought they would simply join other farmers in a smooth transition to the new programs.

Then they found out that not only had they lost their status as farmers – but they also had to pay back any funds they’d been given under CAIS, dating back to 2003.

They have been fighting the reclassification for the past two years, without success, and now face a deadline, in January, for paying back the money they got under CAIS.

That’s why Ms. Dawes is looking out at the millions of seedlings in her greenhouses this fall, wondering if this is her last crop.

“We’re really facing serious introspection as to whether we can carry on,” said Ms. Dawes in an interview. “This is dire for us. I know there are others in the same position. … I am fully expecting some of my colleagues not to survive.”

One B.C. silviculture operation closed its doors earlier this year. Three others, facing CAIS clawbacks from the government of up to $300,000 each, may soon follow.

If the silviculture business was booming this year, they might be able to come up with the money to repay the federal government.

But the economic crisis in the U.S. has destroyed the market for B.C. lumber, forcing the industry to scale back on replanting. There were 270 million seedlings planted in B.C. last year.

Ms. Dawes’s business had orders fall by 10 million seedlings this year and is expecting another shortfall next year.

This is the kind of market downturn the federal government designed its agricultural crop insurance programs for.

“When the program changed we had a CAIS agent come and explain the new programs to us. … They came to our site and said, ‘Well, you are obviously a farm, so you qualify.’ Then they phoned back later and said ‘The rules have been changed’,” said Ms. Dawes.

“They disqualified us based on our market.”

Sell seedlings to a landscaping company and you are a farm.

Sell to a logger and you are a tree-lot operator.

A vast area of B.C.’s forest has been destroyed by the pine beetle infestation.

In the fight against global warming, the need to plant new trees to replace dead ones would seem urgent.

Instead, because of a bureaucratic shuffling of paper in Ottawa, the people growing the crops needed to restore the forests are withering on the vine, just when they are needed most.

© The Globe and Mail