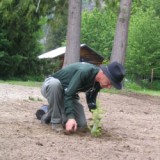 In early June of this year the silviculture industry celebrated British Columbia’s six billionth seedling reforestation milestone in a series of community and media events covering all quarters of the province.

In early June of this year the silviculture industry celebrated British Columbia’s six billionth seedling reforestation milestone in a series of community and media events covering all quarters of the province. Not since the then deputy minister of forests Mike Apsey hosted the first billionth tree celebration in the early 80’s have tree planters actually been officially invited to participate in this symbolic exercise. So maybe it was time for the silviculture sector to claim the celebration and in taking a little credit for the accomplishment share it with the communities who depend on the forests now and in the future. At a time when the mood in forestry is largely funeral it was a positive reminder that we are good at growing seedlings and planting them in this province.

There are lots of figures floating around today pertaining to the forests. And most of them are on an unimaginable scale. For instance what does 12 million hectares of beetle-attacked wood look like? Even if there was a vantage point to appreciate this area I am sure any normal human would fall a few synapses short of fully comprehending what they were seeing. The six billionth tree milestone suffers from the same problem of perspective not only in scale, but in comprehending the effort involved to plant that many seedlings. I personally balk at somewhere near imagining a million, which is planting one tree a second for eleven and a half days. One billion is doing that for 32 years. So six billion is, well, way out there.

If we say six billion trees is planting a 150 laps around the equator at one meter spacing I’m not sure that helps either, being few of us have actually walked round the equator to know what that involves. My old favourite of using the spinal leverage ergonomic equivalent to compare planting six billion trees to lifting the Great Pyramid up and down six times only makes sense to chiropractors. And people keep asking, if you’ve picked up the pyramid why would you put it back down again? The comparison implied an element of futility which is not what we want to convey in the context of tree planting.

Time is a problem too. Right now as I write this trees are being planted at more than 100 per second provincially, the pace needed to plant this year’s estimated 250 million seedlings. To achieve six billion we have averaged 80 trees per second during the field season for the last four decades. But even this fairly straightforward metric is lost when you consider this in its panoramic perspective. These trees aren’t being planted in one convenient spot, but are the outcome of diverse efforts across the whole province. The logistics, innovations, improvisations, planning and supervision for this kind of dispersed campaign are lost in the measurement of so many trees per second.

So is comprehending planting six billion trees one of life’s deeper mysteries? In such a human accomplishment it seems to suffer from seemingly inhuman measurement. By human I mean that tree planting is one of those increasingly rare manual occupations where people actually work for a living. In the modern industrial word robots and machines do most of this kind of production.

Perhaps it is worth reflecting that tree planting in B.C. is still something that directly requires the human hand. And perhaps this is the level that it can be best understood. That by one tree at a time, an increment defined literally by hand, we can accomplish remarkable things.

In celebrating the six billion tree milestone we chose to recognize in particular the tree planters themselves: both the stolid veterans and the 100,000 or so who have passed through the industry as part of growing up in Canada. Again the WSCA would like to thank those workers for their generosity of spirit and their hard work. Also we would like to thank all of those who helped with this year’s milestone. May the next billionth tree celebration be soon.