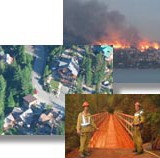 The WSCA will hold a major wildfire conference this spring in Whistler, B.C. May 11, 12, 13 featuring top international speakers on the growing wildfire threat in Western Canada. The conference will appeal to forestry contractors, fire chiefs, city planners, the general public, foresters and anyone with a stake in the health of Western Canada’s forests.

The year 2003 produced an exceptional wildfire season throughout much of Western Canada. In many cases catastrophic fires extended across the forest landscape into the urban interface. Thousands of residents were evacuated and hundreds of homes lost. This apparent assault on the security of rural and suburban life left communities stunned and emergency response agencies often stretched beyond their capacities. In some cases they were overhwhelmed.

However, for many of those familiar with the accumulating wildfire threat in our forests the remarkable thing about the 2003 wildfire season was that it hadn’t happened sooner and more often. For years the confluence of forest fuel build up, weather, and residential ingrowth into forest lands has been creating a disastrous mix. Other jurisdictions in the U.S. and Australia have received their indoctrination into this new order of things over the past decade with repeating years of catasprophic wildfires. With 2003 Western Canada’s immunity to these events appears to have expired. Many believe we have entered a disconcerting new era of wildire behaviour—a condition we can expect to stay with us for some time.

Defining and assessing this new era of wildfire is one of the main purposes of the Western Silvicultural Contractors’ Association’s 2004 B.C. Wildfire Conference: Wildland Urban Interface Fire in the New Era. It will be held in Whistler, British Columbia, May 11th, 12th, 13th, 2004.

Just what is it that fire fighters, community leaders and government policy makers are up against as catastrophic wildfire threatens forest habitat, resources, and neighbourhoods? At the wildfire conference we will examine the origins of the present predicament and look at ways to measure and mitigate its effect from the perspective of both policy and practice. We will forecast the consequences of maintaining our present management course while comparing that to other alternative strategies. We will look at the economic, ecological and social policy areas of fire management and identify their information and strategic gaps, their potential opportunities and, we hope, the possible remedies they contain. All in all an ambitious agenda, but one that needs to be attempted.

To help in all this the WSCA is inviting speakers and expert opinion leaders from across Canada, the U.S. and Australia. They will speak from their experience of the science, policy and practice of dealing with wildfire from around the world. We can expect these presenters to challenge our assumptions and inform many of us beyond our current understanding. In the end we hope they will better dispose us all to the original thinking it is likely to take to tackle the challenge of mitigating and managing the wildfire threat in our forest ecosystems and the urban interface.

Likely to benefit from the conference’s information and insight will be any interested member of the public, fire practitioners, forest ecologists, community planners, community forest directors, fire chiefs, forestry contractors, forest product entrepreneurs, park managers, conservationists, fire fighters, forest managers and homeowners. In other words just about anyone with a stake in the health and sustainabilty of Western Canada’s forests.

For more information on the 2004 B.C. Wildfire Conference contact the Western Silvicultural Contractors’ Association at 604-736-8660 or visit our special conference website at www.wildfireconference04.com.