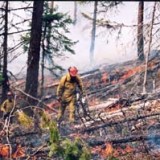 In August as catastrophic wildfires destroyed homes and forests in the Thompson Valley Forest Minister Mike de Jong announced the province would return to prescribed burning practices. Is it the first in a series of forest management changes due to wildfire in B.C.?

Is prescribed burning back?

One immediate example of forestry practice change due to this year’s fire season is the Minister of Forest’s August 11th announcement, carried in the Vancouver Sun, saying that government will encourage a return to the practice of prescribed burning in the province. The minister’s reported comments did not specify if he meant the traditional burning of cutblocks for slash reduction and site preparation or the more complex underburning required in eco-system restoration activities. Either way this kind of work might revive the prescribed burning business in B.C. which has just about disappeared. (More prescribed burning is done annually in the province’s national parks than across the rest of B.C.) It could also create a whole new industry trained in the highly sophisticated pyrotechnics needed for eco-system restoration.

One interesting observation made on some wildfires this summer supporting prescribed burning on dry forest planting sites is that plantations appear to have suffered less damage to wildfires if they were prescribed-burned before planting. This practice removes the small fuels on dry sites making the plantations more resistant to the advance of the wildfire. This too has been reported in studies in the U.S. After watching fires make good runs across previously unburned plantations with noticeable slash components protection branch foresters in the Kootenays have noted that the left over slash on many cutblocks poses a major hazard because of its effect on wildfire behaviour.

The WSCA supported the minister’s August announcement regarding burning in a letter to the Vancouver Sun. Previously, during the spring, we flew Minister de Jong over the Whistler/Pemberton corridor pointing out the interface fire hazard faced by communities in that region. The tour included some pilot prescribed burn, forestry and logging projects designed to reduce forest fuels and the threat to nearby communities. The tour made an impression on the minister and the ensuing wildfire season likely served to emphasize our points. It is possible that our tour had some influence on the Minister’s willingness to recognize that prescribed burning is due for a comeback. (Contractors interested in taking this same tour this fall should contact me.)