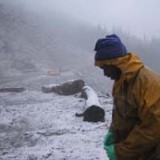 Spring flooding threats are on the wane as freshet peaks pass. But drought conditions are emerging in the Interior.

The June 15 Snow Bulletin is now posted on the River Forecast Centre web page. As expected, rivers levels throughout the interior are dropping as the mountain snow packs melt out. Most of the major rivers experienced their freshet peak between June 1st and June 12th and are now expected to decline steadily. Some of coastal rivers may peak yet see higher peaks however flood flows are not likely to occur. OUTLOOK

The risk of freshet flooding has past in most areas of the province as the majority of the mountain snow pack has melted. A few areas of the Columbia River basin, the North and South Thompson River basin and the Coast Mountains still have moderate snow packs for the period however new freshet peaks are unlikely as the remaining snow melts. It would now take a substantial rainfall event to generate peaks higher than those already experienced on the major interior rivers. DROUGHT

Volume flows in the major rivers of the province are expected to be below normal for this freshet period. Precipitation deficits over the past 8 months could produce drought conditions in some areas of the province assuming normal or below normal summer precipitation. Areas at risk are the Similkameen, Cariboo, Chilcotin Plateau and the Nechako Basin. Smaller water bodies could dry up earlier than normal and larger lakes and rivers could experience below normal levels throughout the summer.